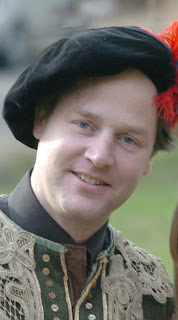 Nick Clegg, leader of the Liberal Democrats, Corporal Clegg, as I like to think of him, is on a charm offensive. Clearly keeping his eye on those wobbly opinion polls, he is praying for a hung parliament; for that is the only way that he will get the scent of power, as king-maker for a day. Hoping to appeal to wavering Tories, he is donning the garb of the German Free Democrats, calling for tax cuts and smaller government. He even says that Margaret Thatcher is an inspiration to him

All I can say is that Corporal Clegg is no inspiration to me, and that I would trust Greeks bearing gifts more than I would trust him bearing blue roses. Keep politics out of politics, that really should be the motto of the Liberal Democrats, who stand for nothing, so far as I am concerned, but the shabbiest and shallowest forms of opportunism. In The Spectator Bruce Anderson quotes from a handbook for party workers: “You can secure support from voters who normally vote Tory by being effectively anti-Labour and similarly in a Tory area secure Labour votes by being anti-Tory.”

Oh, they do stand for one thing, Clegg stands for one thing – Europe. This was the party brought the Europe show to these islands, a melodrama in one-act which will run and run. Clegg himself does not like to bark too loudly about this, because he knows how unpopular it is with the voters, but he is in favour of going the whole way to a federal Europe. I personally find it difficult to imagine anything worse. Europe may be his country; it most certainly is not mine; it will never be mine.

When it comes to Europe, when it came to the question of the Lisbon Treaty the Corporal and his party proved just hypocritical as Labour. In their 2005 Manifesto they made clear their support for the proposed Constitution, with the caveat that ratification must be subject to a referendum. But when Constitution became the Treaty, as treacherous a piece of political chicanery as is possible to conceive, they supported its passage through Parliament, something worth remembering when their canvassers come calling.

I suppose I am the worst person to offer any comment on the Liberal Democrats for the simple reason that I have never made the effort to get beneath the surface of the party. To me it’s all surface and no substance. I hate Labour; I’m indifferent to the Liberal Democrats. It’s not a party; it’s a kind glee club for all sorts of woolly-minded people, neither one thing nor the other; bloodless, insipid, worthless. Sorry, that’s wrong-they are the European Party. That surely counts for something.