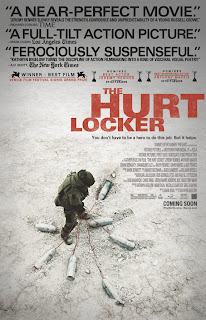 I simply had to see The Hurt Locker after its triumph at this year’s Oscars. If it had not been for this I might have missed it altogether, which would have been rather a pity, because its one of the best war movies I think I’ve ever watched.

Directed by Kathryn Bigelow, with a screenplay by Mark Boal, The Hurt Locker stars Jeremy Renner as Sergeant William James, Anthony Mackie as Sergeant J. T. Sanborn, and Brain Geraghty as Specialist Owen Eldridge, members of a three-man bomb disposal team in Iraq during the early stages of the insurgency following the occupation of 2003.

One review I read described the movie as ‘anti-war.’ It’s nothing of the sort; it’s just an unremitting and impressive slice of ‘war realism.’ It offers no judgements; it just shows things as they are; it shows an uncompromising cross-section of the realities of Iraq, where the enemy is everywhere and nowhere, where there is no frontline, where it is impossible to tell foes from friends.

There is a bizarre unreality to the whole thing, where the conflict itself almost transforms into a larger movie setting, a movie within a movie, with participants and bystanders, actors and spectators, joined together by the unwritten script. One scene I thought particularly telling was when an IED is being defused by Sergeant James as the other two provide security cover, being watched over by Iraqi civilians, one filming the proceedings, getting ready, as the soldiers say, for his YouTube moment.

James, the team leader, joins after his predecessor is killed. Soon his reckless and unconventional methods unsettle Sanborn and Eldridge, just as his courage impresses his superiors. The performances are all good, Boal’s particularly so, for it’s never quite possible to work out exactly what motivates him. Is he mad, has he been so desensitised that he simply does not care; or is he excited, does war excite him, does the adrenalin rush excite him?

Whatever the answer to these questions it is not just his own life he puts at risk but also those of his colleagues, to the point where they even consider, if half in jest, arranging his ‘accidental’ death. In the end it becomes a race to see if the men will all complete their tour of duty and get back to reality, to normality. In the end we see that for James Iraq is normality.

It is an exciting movie and it’s impossible to watch without feeling the tension, without sharing the adrenalin rush. The whole thing is thoughtful, intelligent and well-paced. I imagine it is the kind of depiction of war, and the conflicting emotions of war, that soldiers will understand. It’s the kind of film that goes a long way to helping those who have never experienced the tensions and the fear of war to understand also. More than that, it’s as a clever a piece of controlled and precise movie direction as I have ever seen.