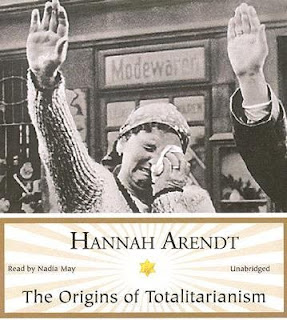 Hannah Arendt could certainly draw on some strong authorities for her model of totalitarianism; for none other than Leon Trotsky had said that there was little to separate Stalin and Hitler one from the other, judging by the political techniques that they favoured. And he should know, should he not?

There were similarities, of course there were similarities: both presided over one-party states; both favoured terror and both made fulsome use of propaganda and forms of mass mobilisation. But the analysis of Arendt-and of Trotsky-only serves to confuse more than it enlightens. In terms of both theory and of practice there were real and abiding differences between Hitlerism and Stalinism; between, what might be described as irrational and rational forms of dictatorship.

So, how is this essential difference to be defined? I can put it no better than this: when Martin Bormann's son asked what National Socialism was, he was told quite simply that it was "The will of the Führer." In other words, National Socialism, as a form of political practice, and as a style of government, is inconceivable without Hitler. The system of administration Hitler favoured was devoid of all structure and method; of all lines of bureaucratic authority. At root, it was little better than a form of Social Darwinism, without any discernable rational order. At one point, for example, no less than three separate agencies had an input into foreign policy, all with contradictory aims, and all with equal access to the Führer. As Ian Kershaw has expressed it, "Hitler's leadership was utterly incompatible with a rational decision-making process, or with a coherent, unified administration and the attainment of limited goals...its self-destructive capacity unmistakeable, its eventual demise certain."

If Hitler was Nazism, Stalin was most definitely not Communism. In other words, he did not create the system, nor did he shape it to match the ends of his own ambition. He worked within the existing structures of Soviet power, its ideology and its administrative procedures. This defined both the nature, and, let me stress this, the limitations of his power. There were some things, in other words, that even the great Stalin could not do: he always had to operate within, and pay homage to, a system established by Lenin, a system that went well beyond his authority and presence.

Stalin did not destroy or pervert Leninism: he was its most perfect expression, the superlative bureaucrat, and the greatest of political managers. He worked, above all, to a rational and to a given set of ends, because that was what was expected. There was a degree of stability and predictability to the Soviet dictatorship which simply did not exist in Nazi Germany. It was the nature, the transcendent nature, if you like, of the Communist ideal that enabled Stalin's successor to condemn his 'mismanagement'. No Nazi version of Khrushchev would ever come to accuse Hitler in such terms. The very idea of such a thing is inconceivable.
Posted by Anastasia F-B at 13:08