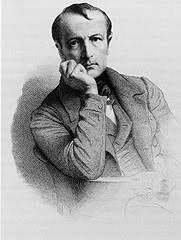 The National Gallery is presently holding an exhibition of the work of Paul Delaroche, a nineteenth century French painter much given to depicting subjects from English history. His work includes such paintings as Strafford Lead to Execution, showing Thomas Wentworth, 1st Earl of Strafford, one of the principal advisors to Charles I, being blessed by Archbishop Laud, himself imprisoned, while on his way to the block, The Princes in the Tower and the recently rediscovered Charles I Insulted by Cromwell’s Soldiers, which for me conjures up aspects of medieval depictions of the passion of Jesus. 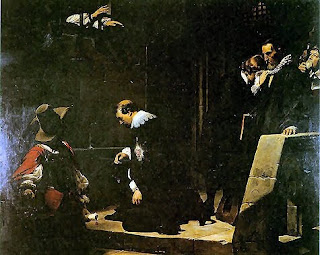 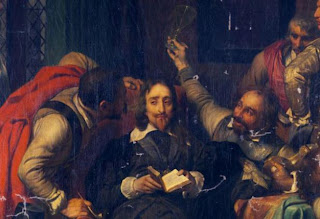 However, the centrepiece of the show surely has to be the enduringly popular The Execution of Lady Jane Grey. First exhibited at the Paris Salon in 1834 it was an immediate sensation amongst a French audience, at least some of whom would have remembered the execution of Queen Marie Antoinette. It depicts the last moments, the last fraught moments, before Jane’s execution for treason in 1554. Jane, who ruled England as butterfly rules a day, was beheaded on the orders of the Catholic Queen Mary.

It’s a wonderful painting, one of my personal favourites on an event in history. There she is, the blindfolded teenager, like a martyr in white, all of the light focused on her, groping for the block. In the background her attendants collapse in grief, while to the right the executioner waits with his axe. It’s grand, intense, full of melodrama and pathos. Do go and see it if you can, and remember the Butterfly Queen. 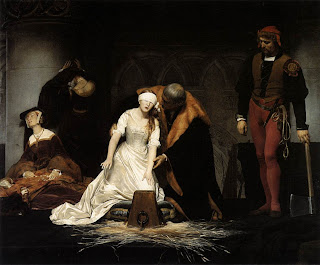