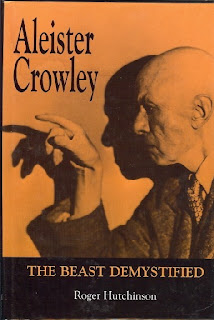 This is a review I wrote a year or so ago. I’m adding it in the light of my recent visit to Loch Ness, one of the Beast’s erstwhile lairs. :-))

Sometimes biographies read a little like icebergs: they hide more than they reveal. So it is with Roger Hutchinson’s Aleister Crowley: The Beast Demystified , a quick trot through the life of Aleister Crowley, the sometime ‘Beast’ and the ‘Wickedest Man in the World.’ Actually, I was rather torn by two conflicting emotions in reading this; first, my admiration for his playful hedonism, his thirst for new forms of freedom and his determination to push life to the outer limits of experience; and second, a growing conviction that he was a theatrical, self-indulgent fraud.

Hutchinson tries to strike a balance, maintaining a reasonable standard of objectivity, but he simply never gets below the surface. For me, coming to Crowley for the first time, it was a good basic introduction to the highs and lows of a varied and eccentric career, but I still have no greater understanding of ‘Thelma’ or ‘Magick’ or what it was Crowley was really trying to say to the world. This book is little more than a rather insubstantial hors d'œuvre. I’m still hungry!

As for being the ‘wickedest man in the world’ that was an epithet invented by the worst sections of the British yellow press, rather absurd, when one comes to think of a man who lived at the same time as Hitler and Stalin, and in the same century as Mao Zedong and Pol Pot.

Beginners, like me, might, just might, find this book entertaining, though, be warned, there are no notes or a guide to further reading. Those who have some insight already need not waste their time.
Posted by Anastasia F-B at 16:46