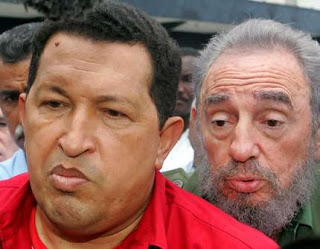 One simply knows that things are going from bad to terrible when the Organisation of American States chooses to turn its spotlight on Chávez’s socialist utopia. In a hefty new report he has been accused of endangering democracy, intimidating opponents and curbing freedom of speech in Venezuela;

The commission finds that the state’s punitive power is being used to intimidate and punish people on account of their political opinions. Venezuela lacks the conditions necessary for human rights defenders and journalists to carry out their work freely.

The report goes on to detail acts of intimidation, harassment and violence and the use of judicial action to criminalise protest; of the law being suborned as an instrument of the state; of independent judges being sacked for not following the correct political line. The interesting thing here is that the OAS usually has a Nelson-like capacity to turn a blind eye to the misdeeds of its members. No longer, it seems.

The reaction from the Chavistas has been predictable. Roy Chaderton, Venezuela’s ambassador to the OAS, has criticised the report as the work of ‘imperialist bureaucrats’, whose aim is to destabilise the country in advance of parliamentary elections in September. Chávez himself, never short of a witty retort, has described the OAS as “excrement.”

I’ve tried to form an image in my mind of what an ‘imperialist bureaucrat’ might look like without, I have to say, a tremendous amount of success. Who are these ‘imperialist bureaucrats, you might ask, and where do they come from? Well, the six-strong commission that compiled the report was made up of jurists and human rights activists from America, Argentina, Brazil, and Chile, as well as from Costa Rica and Antigua, both places well-known for their paper-clip imperialism.

Meanwhile things get bleaker by the day for the people of a country whose economy by more than 3% last year, a country that now suffers from the worst forms of stagflation. The gloom is deepened by, well, gloom; for the cities are continually plunged into darkness by electricity shortages. People are so frustrated and angry that a Chávez rally was even interrupted by what is known locally as a cacerolazo, a banging of pots and pans.

I expect many long for the days of good old fashioned and straightforward imperialism, the kind supplied by the likes Richard Nixon and Henry Kissinger, rather than the tame paper-clip variety. With Nixon and Kissinger in charge I suspect Hugo the Horrible would have had a very short shelf-life. Now one can only sympathise with the people who continue to suffer under this thug’s misgovernment.
Posted by Anastasia F-B at 13:31