Trolly Dollies of the World Unite! 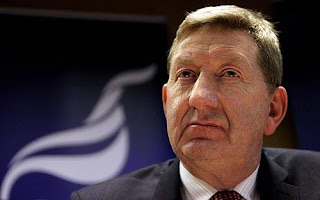 One only has to take a few days of and there is a complete news mountain to climb! I had a super long-weekend in Paris, cutting myself off from the troubles of the world; refusing even to watch CNN. Well, now I'm paying for it, a good part of Monday being spent in catching up, immersing myself in fresh troubles. And, my, what a lot there seem to be. History surely is repeating itself in the dog days of our dreadful Labour government. My mind is immediately drawn to the opening sentence of Karl Marx's "The Eighteenth Brumaire of Louis Bonaparte";

Hegel remarks somewhere that all great world-historic facts and personages appear, so to speak, twice. He forgot to add: the first time as tragedy, the second time as farce. Caussidière for Danton, Louis Blanc for Robespierre, the Montagne of 1848 to 1851 for the Montagne of 1793 to 1795, the nephew for the uncle. And the same caricature occurs in the circumstances of the second edition of the Eighteenth Brumaire.

Spot on, dear Karl; the first time as tragedy the second time as farce: Gordon Brown for Jim Callaghan, Alistair Darling for Dennis Healy; the Spring of Troubles for the Winter of Discontent. And now we have Red Len McCluskey for Jack Jones or any other Communist or crypto-Communist of that time. Len is certainly a man to watch, a source of present troubles, a source of future troubles.

I know he's not exactly a household name, but he represents a new kind of trade union militancy that most thought had been buried by Margaret Thatcher all those years ago. But, in the twilight of this government, Red Len has emerged like Lazarus come from the dead. You may have read about him in The Sunday Telegraph, in the piece by Andrew Gilligan (Rise and rise of Red Len), or you may remember him from last Christmas announcing with a "heavy heart" the planned strike of British Airways cabin crew, not long after he told the results of the ballot to cheering union militants, with a nice big beaming grin on his face.

For those who know nothing of the man, Red Len is the assistant general secretary of Unite, the union behind the present wave of militancy, the union that bankrolls the Labour Party; the union that bankrolls the Labour government. I imagine most of the BA trolley dollies have little idea what Len stands for. Well, he stands for Marxism; he stands for Che Guevara; he stands for Cuba and Venezuela, where dictators and crypto-dictators rule the day. Gilligan reports that he has spoken of "reclaiming the Labour Party for our class". Bad news, then, for Lord Rumba of Rio! I just wonder who "our class" are, what this expression conjures up in the mind of Red Len? Fat union bureacrats, possibly? People like himself, certainly.

Red Len is rather a hero to the people behind The Morning Star, a newspaper- of sorts- that used to be associated with the British Communist Party. My, those corpses just keep coming and coming! Seemingly he told this paper that he would "finance Unite members to take over constituency Labour parties." His political strategy clearly is in harmony with that of Charlie Wheelan, another Unite boss, busy at the moment trying to galvanise union members in marginal constituencies through a massive phone poll.

Yes, as I have said, Len has rather a 'thing' for Che Guevara, as murderous a Marxist apparatchik as one is ever likely to come across. But he was just so handsome, unlike Len, with his lumpy face, dominated by a big shapeless nose. He is never likely to be left-wing poster boy himself. No matter; it's the words that are important, Che's message to the world. Len was to be heard preaching that message last summer at the Durham Miner's Gala (more ghosts!), where he said;

We cannot secure our demands through the present system, based on the dominance of private ownership...Let me just leave you with the words of Che Guevara. When asked how long must the struggle continue, he replied: 'Hasta la victoria siempre' - until the final victory.

So, feed on that, boys and girls!

Yes, indeed, and that reminds me of something else. You see, I suspect the dollies might prove to be something of a disappointment to Che McCluskey. They rather enjoy some distinctly non-proletarian pastimes, guaranteed by their present package of perks. When I was in Havana I saw a group of them by the swimming pool of the five-star Parque Central Hotel, living it up somewhat, not just the dollies and their male equivalents, but also the flight crew. I had to move because the women were a bit too loud and the men a shade too lascivious for my taste; but the poor dears do have a right to let their hair down, a right guaranteed by those who have to lodge in less salubrious hotels!

No, these are not the people of which revolutions are made. They are the people foolish enough to be lead by the likes of Red Len; they are the people who may very well contribute to the death of an airline. Trolley dollies of the world unite; you have nothing to lose but the high life.
Posted by Anastasia F-B at 13:15