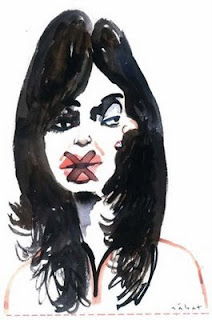 In thinking about Argentina’s unpopular President Kirchner and her present actions over the Falklands I’m minded of some lines from Henry IV Part II, the deathbed scene where the old king is giving advice to his son;

Therefore, my Harry,
Be it thy course to busy giddy minds
With foreign quarrels, that action, hence borne out,
May waste the memory of the former days

Oh, how she is attempting to busy the giddy minds, not just in Argentina, but right across the whole giddy Latin American world. She has wisely eschewed any form of military action, counting instead on regional solidarity and diplomatic pressure. At a wave of the wand the solidarity has been conjured up: she has won the support of the leaders of thirty-two countries in the Caribbean and the Americas, another grand and bogus gesture.

As it says in a leader in The Economist, Argentina is convinced that it has geography, history and international law on its side; that the position should be returned to 1833 when the British ended what in their terms was an illegal occupation. Yes, by all means let’s go back to 1833. Then Patagonia was independent under its own indigenous leadership and Argentina was little more than an enclave around Buenos Aires. Let’s go back to 1833 across the whole Continent, let’s kick the hornets’ nest! But, as I said in my previous Falklands blog, none of this matters. Here history and geography count for nothing. All that matters is the wishes of the people of the Falklands, and as yet they have no desire to be placed under the management of the incompetent Kirchner.

For Kirchner oil’s clearly the thing, not the right of the inhabitants of the Falklands to self-determination, a greater right in international law I find difficult to imagine. But while she may do wonders for the domestic Botox industry she’s not quite so good when it comes to the black stuff. There is a strong possibility of a big oil-strike in Argentine waters but she and Nestor Kirchner, her husband and predecessor, have pursued policies so hostile to private initiative in the energy industry that Argentina’s output of oil and gas has fallen for three years in succession.

The crazy thing is this woman, much given to empty political posturing, is clearly too blinded by short term political considerations- her own tenure of office - to understand that a major oil strike in the Falklands would be of enormous indirect benefit to the Argentine economy. Incurring none of the capital costs involved in exploration, Argentina could become the main onshore base for the Falkland’s oil industry. Its own weakened energy industry could only benefit from the know-how this would create. But, no; bring on the machismo, bring on a tantrum tango and let’s see how far she gets with that particular dance.

If oil is discovered, and discovered in quantity, there’s one other possibility. In 1771, shortly after the very first fracas over possession of the islands, Dr Johnson wrote a pamphlet called Thoughts on the late Transactions Respecting Falkland's Island, in which he said that a colony here could never be independent because it would never be able to maintain itself. At last that situation may be about to change.
Posted by Anastasia F-B at 16:43