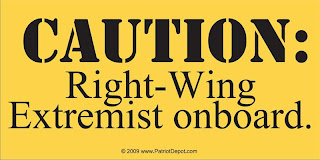 I wrote this for another network, though I think it's worth preserving here also.

B, this is my response to your remarks to me on D's Rabid Righties and Loony Lefties...Which Are You? post. It's turned out to be so prodigiously long, the longest reply that I have ever lodged here, that I have turned it into a separate blog. Anyway, for the sake of others, here is your reply to my comment that the BNP was objectively a party of the left;

Anastasia ... the BNP is a party of the far right, not the left. It knows that; its supporters and fellow travellers all over the world know that (as I said to Badger before ... tell a Polish neonazi skinhead that he's a leftie and see the reaction).

Of course right/left definitions vary, and your 'statist' criterion is useful for your purposes. The fact remains that the BNP is essentially a one-issue party (the issue being race/immigration) that has found it expedient to produce a wider painting-by-numbers 'manifesto'.

No movement whose philosophy is based entirely on race and extreme nationalism (fundamentally on 'difference' between people and peoples) can sensibly be called left-wing, in my view. Left-wing philosophies are based on internationalism and essential 'sameness' of people and peoples, though of course they have often been perverted away from those ideals. This is more fundamental than the 'statism'/'libertarianism' spectrum you posit.

The same applies to the Nazis, of course - conventionally and correctly, in my view, seen as a movement of the extreme right no matter what ostensibly 'socialist' policies they may have had.

The far right hates 'difference'; the left loves it but its love is often blind and stupid. This is why I'm careful to remain in the pragmatic centre.


Alas, B, I fear you and I are destined to stare forever at one another from the opposite sides of an argument, retreating into our respective corners by a process of mutual exhaustion. :-)

Yes, I understand the classic divisions between 'right' and 'left' as you've laid them out here; I just don't think they are meaningful any longer. Indeed, I wonder if they were ever meaningful beyond the realms of pure theory. Lenin, for example, in State and Revolution advocated the withering away of the state, a doctrine I can identify with, only to increase its power tenfold. As for your Polish skinhead I feel sure that he has at best the haziest concepts of ideology; he's just in it for the 'bovver': one day a Communist, the next a Nazi, paying no mind to the fact that these ideologies inflicted terrible harm on his country. I'm sure you know that the closest political collaborators within and without the Russian Duma after the fall of the Soviet Union were the Nationalists and the Communists, both united by hatred of democracy, both sharing new forms of xenophobia.

At the risk of getting bogged down in semantics I will tell you what I understand by the politics of the right, the things that make me right wing. I believe in classic laissez-faire capitalism; I believe in liberty, taken as far as it can within the bounds of the law; I want to minimise the role of the state, I want to reduce it to the point where it exists simply as a guarantor of liberty, no more than that. I think welfarism is corrosive, corrosive of liberty and corrosive of self-respect. I want taxation reduced to an absolute minimum, allowing people to be free to spend their earnings as they wish. I distrust and despise collectivist and statist ideologies of all kinds. My libertarianism even pushes to the frontiers of anarchism; so does that make me 'left-wing'? I could go on like this, but I'm sure you take my point.

The BNP, you say, is of the right. Have you read its programme? The policies it embraces would have been clearly understood and accepted by the likes of Harold Wilson and James Callaghan. It is certainly presented as a single issue party, but not by its own devising; for it is so much more. Do you honestly believe that close on a million English people voted in the European elections for the BNP simply because they hate immigrants? No, most of these people, at my best guess, are Old Labour, people taken for granted for so long by the Socialist establishment. Well, no longer.

Might I draw your attention to Lenin's Century, one of the earliest blogs I posted here. In this I made the point that Fascism and Nazism, in political style and technique, were the bastard children of Communism. In other words they are simply not conceivable as movements without Lenin and Lenin's Revolution. Yes, the scapegoat of Nazism (though not Fascism, at least to begin with) was the Jewish community. But the technique of the scapegoat was again something it inherited from Communism. Their bête noirs may have been different (again to begin with), ranging through the bourgeois, the kulaks, to 'wreckers' and other political phantoms, but ending up, in the case of Stalin, with the Jews. Indeed most of the victims of Stalin's purges were minorities and foreigners of one kind or another.

So, what then of the 'sameness' of people, what then of internationalism? Do you believe that Pol Pot entertained such a concept when he authorised the massacre of Cambodia's Vietnamese minority simply because they were Vietnamese? Do you believe that the Chinese government thinks of the Uyghur people are the 'same' as the Han? Do you think that Colombia's FARC guerillas are operating on 'internationalist' principles when they buy weapons from the proceeds of cocaine? All rhetorical questions, of course, but I'm sure you see the problems emerging in your notions of ideological purity.

There you have it, B. For me the Nazis, the BNP, Jobbik and the rest are indeed parties of the left, standing in objective opposition to the liberty, the desire for liberty and freedom, embraced by the right, the true right, my right.
Posted by Anastasia F-B at 11:28