If there is a modern period in history that excites me in the way that no other does it has to be Weimar Germany, lodged between the stuffy Kaiserreich and the sadomasochistic Nazi state. It was a vibrant time, a creative time, an exciting time to be young, free and alive. Some of my favourite movies come from that period, dark, moody, expressionist; movies like Nosferatu and the Cabinet of Doctor Caligari.

It’s for some of these reasons and more than I have a particular fondness for Cabaret, the movie made in the early 1970s, which manages to recapture at least a little of the Weimar spirit, though in its decadent phase. Directed by Bob Fosse and based on Mr Norris Changes Trains and Goodbye to Berlin, novels by Christopher Isherwood, and I am a Camera, a play based on these stories by John van Druten, it stars Liza Minnelli as the divinely decadent Sally Bowles, one of my absolute favourite characters, an uninhibited, delightful free spirit. Joel Grey is also really good as the master of ceremonies in the cabaret itself, the place Sally works. There are all sorts of wonderful allusions to the time, including the depiction of characters in the early scenes that may very well have come straight out of the paintings of Otto Dix. 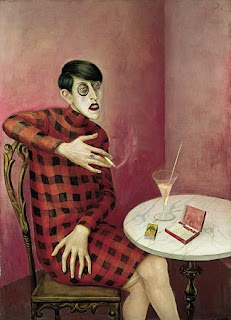 I don't normally like musicals, the old Hollywood song and dance routines; but this is different, not only are the songs wonderful, but they are mostly presented within context, in the cabaret itself, not intruding into the unfolding drama outside. There is only one that is not, the Nazi song in the Biergarten, also perfectly within context. The story itself is really about a world tottering on the edge of destruction, with the Nazis, though never centre stage, making an increasingly intrusive appearance, brilliantly caught in the closing scenes, with more and more swastika armbands appearing in the cabaret itself, clearly no longer a place to leave one's troubles outside.