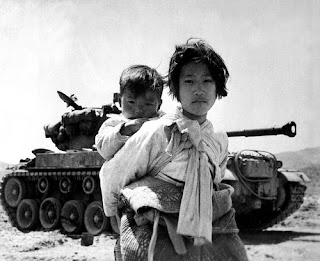 We’ve not long passed the sixtieth anniversary of the outbreak of the Korean War on 25 June, 1950. The official line in North Korea, which provoked the war by attacking the South, is that it was a defensive struggle against American “aggression.” This rewriting of history was long supported by China, which intervened in the conflict in when Kim II-sung’s communist regime was in danger of being wiped out after the American victory in the Battle of Inchon.

From that time onwards the conflict, which lasted until the ceasefire of 1953, was referred to as “The War to Resist America and Aid Korea.” According to history textbooks, it began when the United States assembled a United Nations army of fifteen countries, invaded the North, carrying the war to China’s border with Korea on the Yalu River.

Now the Chinese have finally admitted the truth. On Friday the official government news agency published a special report in which it was said that “On June 25, 1950, the North Korean army marched over the 38th Parallel and started the attack. Three days later, Seoul fell.” The Global Times, a government-run newspaper, said that it was high time to renew and strengthen the efforts by Chinese scholars to “discover the truth about the Korean War.” North Korea, with no great surprise, celebrated the anniversary by trotting out the same old lies.

It’s commendable to see the Chinese dedicate themselves to a new spirit of truth and scholarship. But things are never that simple, are they, when it comes to matters like this? One should always look for a subliminal message, a sub-text of some kind.

North Korea is still China’s friend, but a more tiresome and unstable friend is difficult to imagine. The sinking of the South Korea naval vessel in March, followed by denials and hysterical war-mongering in the North, shows how dangerously unpredictable this frightful termite nation can be. I rather suspect that the Chinese are making it plain that the North can expect no aid from them in any planned or future “defence”.
Posted by Anastasia F-B at 16:02