Battle of the Passports 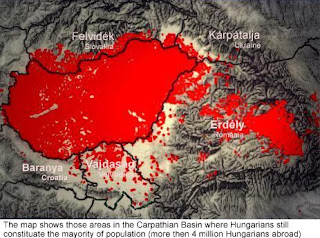 I’ve sometimes heard it said that the European Union has somehow sublimated and overcome the conflicts and tensions of history; that it represents, to use an appalling cliché, a new horizon. Well, to those who believe tendentious tosh like that all I will say let them come to Hungary, let them come to Slovakia! These are places where the past is not cheated.

I think one would have to scour present day Germany pretty hard to find any passion left over the Versailles ‘Diktat’ of 1919, but Hungarians to this day still regret the dismemberment of their country in the Treaty of Trianon, concluded in 1920, which scattered significant Magyar minorities across all of the adjacent lands. In Slovakia, the country’s northern neighbour, no fewer than 500,000 people, or 10% of the population, are of ethnic Hungarian origin, mostly concentrated in the border region. And it is here where the tension arises.

Doing down Hungarians has a rather popular appeal among the Slovaks. It has enabled Robert Fico, the country’s prime minister, to win elections. And it was not all shallow demagoguery, no; for measures have been introduced to criminalise the use of the Hungarian language in certain contexts.

Matters have become worse since the success of Viktor Orban in Hungary’s parliamentary elections earlier this year. Virtually the first act of the new centre-left Fidesz government was to give some 2.5 million ethnic Magyars living abroad the right to a Hungarian passport. This was also a populist move, one that takes eyes off Hungary’s present economic troubles, and one that undermines Jobbik, the far-right opposition party. But what looks good in Budapest looks bad upriver in Bratislava.

Slovakia, only fully independent for seventeen years following the amicable divorce with the Czechs, was a Hungarian colony for centuries, a time of not particularly happy memory. In the light of the Hungarian legislation, Fico has now pushed a law through parliament requiring Slovak citizens to report the acquisition of dual nationality or face a fine of more than $4000. People in this position will also lose their Slovak passports, which in practice means losing their citizenship.

Fico is using the most emotive language, according to a report I read in The Economist, talking of a “Hungarian brown plague”, a clear reference to the war-time fascist Arrow Cross government. He has even raised the possibility that Hungary’s passport policy may be the precursor to irredentist claims. “Are we supposed to stand by”, he said, "when someone creates an enclave of their own citizens on Slovak territory?”

That’s nothing really compared with the words of Jan Slota, leader of the racist Slovak National Party, a junior partner in Fico’s coalition. He has even suggested the possibility of armed conflict in the face the relentless “militarisation” of Hungarian society. It actually gets worse for Orban has declared 4 June, the anniversary of Trianon, as National Unity Day, recalling the nostalgia for Greater Hungary.

Will no one tell me what she sings?--
Perhaps the plaintive numbers flow
For old, unhappy, far-off things,
And battles long ago…
Posted by Anastasia F-B at 16:18