In Praise of Tommy Atkins 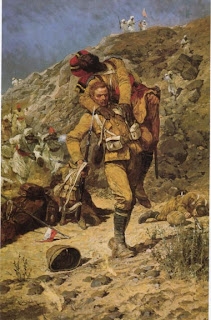 Saturday, June 26, marked Armed Forces Day in the United Kingdom. It’s intended as a day of tribute to the men and women of the army, navy, air force, all those who preserve the security of this nation, all those who have been prepared to sacrifice themselves on its behalf.

David Cameron, the Prime Minister, said recently that supporting our Armed Forces isn’t just a government responsibility – it’s a social responsibility. This is a sentiment I fully agree with. My family has a long connection with the military. My great-grandfather served in the army throughout the First World War, to begin with as a subaltern, rising to the rank of Major. He was wounded at the Somme in 1916 and won a Military Cross for his part in the Battle of Passchendale in 1917. My grandfather served with the British Indian Army both before and during the Second World War, first in what was then the Malay States, afterwards in India and Burma. My great-uncle was with the Fleet Air Arm.

So, yes, I am delighted to support our Armed Forces, not just for this historic link but for the selfless way they carry out their duty in the present day. They go where they are told to go; that’s what service people do. As far as I am concerned they are beyond criticism.

What is not beyond criticism is the actions of politicians, the way in which politicians have used and abused the armed forces. The last administration sent our forces on a series of campaigns, ill-conceived and badly executed, without proper thought given to long-term strategy; without proper thought given, so far as I can see, to any kind of strategy.

Our people are now involved in a hopeless war in Afghanistan, a place where over three hundred have died, sometimes because they were starved of resources by the government that sent them there. The war-mongering Labour governments of Tony Blair and Gordon Brown thought to do it all on the cheap, expecting maximum effort for minimum cost. What was cheap for them was dear for others.

You talk o' better food for us, an' schools, an' fires, an' all:
We'll wait for extry rations if you treat us rational.
Don't mess about the cook-room slops, but prove it to our face
The Widow's Uniform is not the soldier-man's disgrace.
For it's "Tommy this", an' "Tommy that", an' "Chuck him out,
the brute!"
But it's "Saviour of 'is country" when the guns begin to shoot;
An' it's "Tommy this", an' "Tommy that", an' anything you please
An' Tommy ain't a bloomin' fool -- you bet that Tommy sees!