Saying no to ‘Reform’ 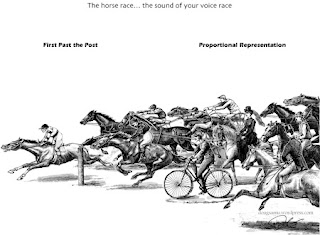 To begin with I should make my own position clear: I’m totally opposed to any kind of electoral ‘reform.’ To be more exact, I’m opposed to the proposals to change the way we elect members of Parliament in England from our present ‘first past the post’ method to some form of proportional representation.

The first past the post system is clear and simple, one that has served us reasonably well over the years, enabling strong governments to emerge with a definite mandate. For those who may not be familiar with how it works, those who live in countries that do have a system of proportional representation, for electoral purposes Britain is divided into a number of Parliamentary constituencies. In electoral contests the person who takes a majority of votes is the winner, no matter if the vote she or he attracts is less than that of all of the others combined. Although we have slightly lost the point in modern politics, people are voting for an individual, not a party, and that individual maintains a close relationship with the local constituency, representing all of the people, not just those who voted for her or him.

It’s unfair, the opponents say. It favours the ruling party, which can command an absolute majority in Parliament though it may not have a commanding lead in the total number of votes cast across the country. It’s an argument put most forcefully in England by the Liberal Democrats, who consistently come second or third in most of the constituency contests but still attract a reasonably high percentage of the national vote when all of the constituency results are combined.

In the wake of our recent Parliamentary election all sorts of specious arguments have been put forward, arguments assuming a consensus on our supposedly ‘broken politics.’ First past the post is outmoded, the cry goes up, the era of two party politics is over. There is no doubt at all in my mind that this is all so much tosh.

Minority or coalition government is unusual in this country but we have been here in the past and I dare say we will be back here in the future. Our politics are by no means ‘broken’ simply because the Liberal Democrats think it unfair that they don’t have enough seats, or the United Kingdom Independence Party or the British National Party think it unfair because they have no seats at all, although they do in the European Parliament, that toy town assembly which does operate a system of proportional representation.

There is a very good piece in the recent issue of Standpoint by William Norton on the whole question of voting ‘reform’ (Out of proportion.) The essential point that he makes is that to say first past the post is “unfair” because Party A, receiving x per cent of the national vote, does not receive x per cent of MPs already presupposes that “fairness” is the same as proportional representation. But rival electoral systems represent rival and alternative definitions of fairness.

He gives the example of Dr Richard Taylor, who in the general elections of 2001 and 2005 was elected Member of Parliament for Wyre Forest as in independent heading a campaign to save Kidderminster Hospital. Enough people in the constituency felt strongly enough about this to overturn party loyalties and the established political machine. In other words, he was elected by local people voting for a local candidate on the basis of a local issue. But people across the nation, people who do not live in Wyre Forest, clearly have no interest whatsoever in Kidderminster Hospital. So, in the great pool of proportional representation, Dr Taylor’s vote would have been infinitesimal. He would never have been elected, which, as Norton rightly says, would have been savagely unfair to the people of Wyre Forest. They would have been drowned in a sea of ‘fairness.’

Proportional representation, you see, is fair to parties, not people. It means that the electorate would forever be fodder for party machines. It means that, since coalition is inevitable because no party would ever achieve an absolute majority of the votes cast, manifestos would be either fraudulent, in that the programme could not be implemented in its entirety, or that they would serve as the opening gambit in the inevitable post-election horse trading. Politicians who talk about our ‘broken’ politics or our ‘outmoded’ electoral system (so outmoded that it’s used by some sixty countries) are peddling a message of hypocritical self-interest. They care more about themselves and their sectional advantage than they do about real fairness.
Posted by Anastasia F-B at 16:23