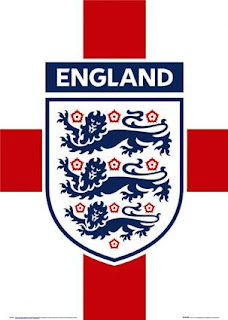 My boyfriend is in South Africa just at the present with the rest of the barmy army. We’ve had some lengthy conversations recently, dominated, I have to say, by his growing sense of frustration and disappointment over the team’s performance. I much prefer tennis, so I was just ever so slightly bored!

No, I don’t care that much for soccer; I don’t understand the passions and the tribal mentality it induces. It seems to me to go against all of the principles of sportsmanship, or at least how I understand sportsmanship. It’s the one enthusiasm that he and I do not share. But I do care for my country, and deeply so, just as I care for him. He called after the Slovenia match in an incredibly upbeat mood. His enthusiasm, his optimism, was infectious.

Now the big battle is ahead, that with the ‘ancient’ enemy. I will be with him in spirit. I won’t watch because I simply can’t bear the tension. It may come to nothing; my sense of realism tells me that it’s likely to come to nothing. Still, like the rest of the nation, like all of us who are not there, my positive good wishes, all my best hopes, are with the team. Good luck, England; good luck, my country.
Posted by Anastasia F-B at 17:26