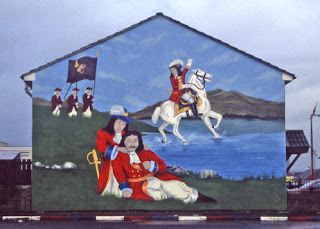 There is perhaps no better illustration of the process by which history is, and can be, turned into mythology than William of Orange's sojourn in Ireland. For the Protestants he became an iconic figure, mounted on his white horse with sword raised, a detail taken from Benjamin West's painting of the Battle of the Boyne, and once reproduced on a thousand gable-ends! For Catholics he was also an icon, one of an unwelcome Protestant ascendency, expressed, at its worst, in the Penal laws. But William came to Ireland not as a crusader but to fight a campaign that was part of his more general struggle against Louis XIV.

It is crucial to understand here that the French king offered his support to James II, the exiled Catholic king of England, not out of a sense of dynastic and confessional solidarity, but simply as a useful way of opening up a fresh theatre against William, his great Continental rival. In this regard the Irish campaign of 1689-90 was merely a small part of a more general European war, in which religion played only a minor part. As such William was a representative of a more general alliance against Louis and his imperial ambitions, an alliance that included Pope Innocent XI. After his famous victory on the Boyne the bells of Rome were rung out in celebration!

It seems likely that William, if the matter had been left to him alone, would have favoured a large measure of religious toleration throughout his lands. But the matter was not left to him alone; he was dependant on the ruling aristocracy in both England and Ireland. After the final victory in 1691, and the Treaty of Limerick, the ruling Protestant minority in Ireland were in no mood for any form of compromise. For them William, living and dead, was the expression of their power, depicted in statue and paint. The divisions between the communities became even more acute in the nineteenth century, with the emergence of the Orange Order, committed to the Protestant cause by constant reminders and celebrations of the past.
Posted by Anastasia F-B at 16:40