Sympathy for the Boer 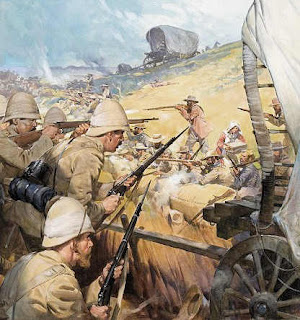 The Second Boer War elicited a lot of sympathy for the Transvaal and the Orange Free State, the two beleaguered republics, and a lot of hostility to Britain across the world. Opposition began at home. The Irish Nationalists were vociferous opponents, which comes, I suppose, as no great surprise. Michael Davitt, the founder of the Irish National Land League, resigned his parliamentary seat at Westminster in protest. He subsequently tried to interest the European powers in the fate of the Boers, writing an apologia, condemning the British for arming “African savages” against two “Christian states”. Arthur Griffith, founder of Sinn Fein, used the occasion of the war in an attempt to focus hostility towards continuing British rule in Ireland.

Kier Hardie, leader of the British Labour Party, absolved the Boers of all blame for the war-and ignored their treatment of black Africans-because they were a "virtuous, republican and pastoral people, with all of the fine qualities that pertain to that way of life." J. A. Hobson, John Burns and Edward Carpenter, left-wing and radical, all combined to describe the war as the work of “Cosmopolitan-Jewish manipulators” living in Cape Colony.

Beyond British shores, Theodore Roosevelt, then governor of New York, and himself no stranger to the attractions of imperialism, expressed some sympathy for the Boers, with whom he shared a Dutch ancestry, though he believed that their downfall was part of an Anglo-Saxon manifest destiny, just as was the downfall of the Spanish Empire in 1898. His distant cousin, Franklin Delano Roosevelt, took a quite different view, presiding over the Harvard Committee for Boer Relief. Sun Yat-Sen, Chinese revolutionary and political leader, was encouraged by the example of Boer resistance, seeing it as a blow against all forms of imperialism.

British conduct during the war, especially the setting up of concentration camps, was the source of much international hostility, though most remained blind to Boer atrocities against black people. Close on 3000 volunteers served with the Boer Republics, which included a Scandinavian Corps, almost wiped out at the Battle of Magersfontein. In the various Boer commandos it was possible to find Germans, Russians, Italians, Irish, French and Americans. The Germans included Count Harra von Zeppelin, at the one extreme, to Fritz Brall, the anarchist, at the other. In the Hollander Corps was to be found Cornelius van Gogh, brother of Vincent, the painter, and Theo the art dealer, who committed suicide after being captured by the British. The Russian Corp, mostly ambulance drivers and scouts, numbered among them Prince Bagration of Tiflis, a Cossack hetman, and Alexander Guchkov, later to serve for a time as Minister of War in the Russian Provisional Government, established after the Revolution of February 1917. The French included Prince Louis d'Orleans et Braganze, cousin of the Orleanist pretender. He was joined by Count de Villebois-Mareuil, one of the founders of Action Francaise.

Naturally enough, the Boers attracted a lot of support in the Netherlands, their ancestral home, with Queen Wilhelmina going so far as to send a warship to bring Paul Kruger, President of the Transvaal, to Europe, where he was well-received, both in Paris and the Hague. Streets were named after him in the Netherlands and Belgium, and a statue erected in his honour in Dresden. German approval of the exiled president was to continue for some time, and the Nazi film industry was later to pay its own tribute in Ohm Krüger, made in 1940. Widespread as it was, pro-Boer sentiment caused no government to bring pressure on the British, and had no affect whatsoever on the outcome of the war.
Posted by Anastasia F-B at 15:52