The problem is not the weapon 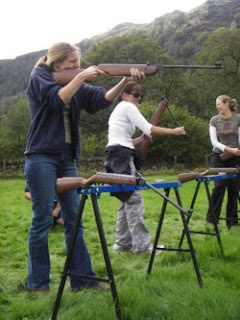 The recent shooting outrage in Cumbria is just too dreadful. Anything I write will almost certainly minimise the depth of the tragedy, an obscene carnival that left twelve people dead and eleven injured, some seriously. I can’t even bring myself to name the perpetrator of this massacre, who finished by killing himself with one of his weapons. Mass shootings are always a horror no matter where they occur. But they are all the more shocking in England precisely because they are so rare.

It’s too soon to make judgements of a general nature but the call has already gone out that our strict gun laws should be made even stricter. At the risk of being misunderstood, or at the risk of being considered insensitive in raising this issue at such I time, I really have to say that this is a serious mistake.

The thing is I enjoy shooting, which opens be to an additional accusation- that of selfishness. I have licences for both a .22 rifle and a four-ten shotgun. I enjoy target practice and I enjoy rough shooting. I really do have to stress that all of the people I have met through this sport are sensible, intelligent and well-balanced. I have no hesitation at all in suggesting that this is true of virtually all of the shooters in this country. It would be wrong to penalise us because of the actions of a single madman.

I was greatly heartened by the comment of David Cameron, our Prime Minister, himself a one-time sports shooter, that it would be a mistake to rush to further gun control. “Of course we should look at the issue”, he said, “but we should not leap to a knee-jerk conclusion on what should be done on the regulatory front. We do have some of the toughest legislation in the world. You can’t legislate to stop a flick switching in someone’s head and for this dreadful sort of action to take place.”

This is just so true. Quick legislation, legislation drafted in the heat of a particular event, is almost always bad legislation; the Dangerous Dog Act of 1991 is a case in point, as the Daily Telegraph said in its Friday leader page. The piece continued with a simple but pertinent truth, the same truth touched on by David;

…one cannot legislate for the actions of madmen, and it is fatuous to try. Nearly three quarters of a million people in this country possess shotgun or firearm licences. We can tighten the restrictions all we want, but in the end the problem is not the weapon, but the wielder.

In that same issue a reader made the point on the letter's page that after the Dunblane Massacre in 1996 the then government passed an act banning the private ownership of all cartridge ammunition handguns, no matter the calibre. Not even the Olympic shooting team was exempted, who ever since have been obliged to train outside the country. Yet now, thirteen years later, there are more illegal weapons in the country than ever before and gun crime has increased steadily. It’s impossible to legislate against this, or if legislation there is it’s all so much whistling in a hurricane.

Civil liberties are already restricted, have been steadily restricted over the years. Now is not the time to turn the light on me or the other three quarter of a million decent and law-binding gun owners.
Posted by Anastasia F-B at 16:17