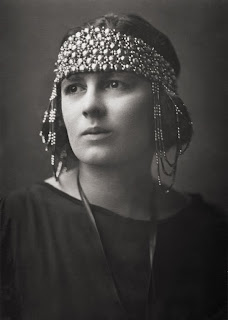 Having been singularly impressed by my reading of Black Lamb and Grey Falcon I've since carried out a brief spot of research on Rebecca West, the author. What a truly remarkable person she was, a person with whom I can identify so strongly in so many ways. She is one of those people almost impossible to put in an easy intellectual or political compartment.

An early feminist, her causes would appear to have been largely of the left, and there is much on her book on Yugoslavia which would identify her with a form of socialism. But like George Orwell I think she is best understood as an English radical, a radical in the tradition set down by Jonathan Swift and Edmund Burke, the one a great Tory and the other a great Whig. They were all, in their individual ways, haters of ideology and the carriers of ideology.

West was one of the first to understand that the Bolshevik Revolution in Russia was a fraud. She was alerted to the violence of the new regime by Emma Goldman, an American anarchist who had experienced it at first hand, and was frustrated that her message was ignored by others on the left, most of whom were to remain blind to the realities of communism right through the period of Stalin's tyranny. For West people like Stalin had a criminal mentality that communism simply facilitated.

Loving Yugoslavia, she was outraged during the Second World War when the Allies decided to back Tito and his communist partisans rather than the royalist Chetniks, headed by Draža Mihailović. Her anti-communism intensified after the war when she saw the old states of Eastern Europe fall to Soviet imperialism. Unlike others on the liberal left she also took a relatively sanguine view of the Senator Joseph McCartney's pursuit of communist subversives in the United States.

I would say that by this point in her life West was objectively a figure of the libertarian right rather than the socialist left, completing a journey that George Orwell might have taken, though she never considered herself a conservative. But for the Labour Party, whose victory she welcomed in 1945, she was an uncomfortable ally, constantly critical of the domination of the trade unions and singularly unimpressed by such leaders as Michael Foot.

Paradoxically she was a great admirer of Margaret Thatcher, both for her achievement as a woman in rising to the top of a male-dominated establishment and for her readiness to stand up to bullying trade unionists like the reptilian Arthur Scargill, leader of the National Union of Mineworkers. The point is, I suppose, that she, unlike many others, was consistent in her radicalism, though she never quite slaked off the snake skin of socialism. Towards the end of her life the true radicals were all on the right, whereas the left was the captive of outmoded thought and political practices restrictive of choice and personal liberty.
Posted by Anastasia F-B at 16:12