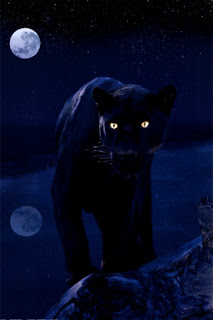 In the late 1760s William Cobbett, then only seven years old, saw something unusual in the grounds of Waverly Abbey near Farnham in Surrey. It was a cat but nothing like any cat he had ever seen before, for it was as big as a middle-sized spaniel.

Years later, now established as one of the great radical campaigners of the day, he was to recall the incident in Rural Rides, a kind of personal Doomsday Book. His sighting all those years before is thought to be the first recorded evidence of that most elusive of creatures – the British Big Cats, sometimes known as Alien or Anomalous Big Cats (ABCs), phantom cats or mystery cats. The Beast of Bodmin and the Beast of Exmoor are probably the most famous of the species, ever present and ever distant.

These cats, often described as puma or panther-like in appearance, inhabit the regions between crypto-zoology and folklore. Sometimes a rational explanation for their existence is offered: that they are the descendants of escapees or animals released by their owners into the wild by the passage in 1976 of the Dangerous Wild Animals Act, making them too expensive to keep. Other times more supernatural explanations are suggested. It is one of these I want to focus one, bizarre in the extreme. It concerns a grim and awful ritual originating in the Scottish Highlands and Islands, a ritual known as the in Gaelic as the Taigheirm.

Carl van Vechten, an American writer and photographer, reports a story he lifted from Deuteroscopy, a book on second sight by one C. G. Horst, published in the early nineteenth century. This describes a cat sacrifice, clearly originating in pagan times, but allegedly practiced into the seventeenth century. There is an article on this also in the recent issue of The Fortean Times.

The ‘recipe’ goes like this. Take as many cats as you can find. Truss them up on a spit and then roast them one by one before a slow fire, having first dedicated them to all the devils. The howling of the tortured cats must not cease for a moment over the four days and nights required to complete the ritual, so just make sure plenty of cats are on hand. Oh, I almost forgot: they should all be black.

So, sticking carefully to this step by step guide, after a time the infernal spirits will be conjured up in the shape of black cats. More and more of these other worldly entities should appear, adding their own terrible howls to that of their roasting living cousins. Finally a cat of monstrous size appears. Those who conducted the ceremony only desist after granted some boon by the great cat spirit.

The last of these ceremonies was, according to Horst, held in the middle of the seventeenth century on the Hebridean island of Mull. However, the great black cat, once brought into existence, seemingly never went away. It’s most recent appearance on the island was last summer, reported by two walkers. A black panther or a black legend, I can’t really decide which.
Posted by Anastasia F-B at 16:05