A Past Buried in Sex 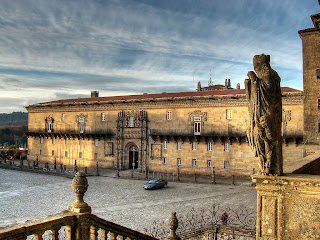 There is a special irony in this, for though it is now a luxury hotel, or paradour, to use the Spanish expression, it was founded in 1499 on the orders of Ferdinand and Isabella, the Catholic Monarchs recalled in the name. Its purpose was to serve as a hostel and a hospital for pilgrims who had completed the journey to visit the shrine of Saint James in the town’s cathedral. So, a place created by the most Catholic of monarchs for this most Christian of reasons was hosting the most profane of entertainments!

I was nineteen years old. I had come to Spain with a group of close friends from my old school to walk the more interesting parts of the Camino, an adventure I blogged about in May of last year (I was a Pilgrim; yes, I was). Once in Santiago we had decided to relax for a day or two before returning to England, staying in Los Reyes Catolicos, a beautiful building and a splendid hotel.

What about the porno, you ask? We had been out late. I was sharing with one of the girls. We were just a bit tipsy. Before going to bed we did a spot of channel surfing, to see what Spanish TV had on offer. Let me stress that it was TV and not the hotel’s movie channel, though that would have been bad enough. We couldn’t quite believe what we were seeing, for what we were seeing was – how can I say this without sounding vulgar? - lodsacock! The whole thing was just too, too funny and my friend and I were overcome with waves of hysterical laughter.

The humour soon passed, though, as the repetitive, urgent inning and outing, upping and downing began to get boring. There was some Spanish dialogue but, quite frankly, I rather suspect that words are quite superfluous in this particular medium. What then struck me was the ugliness of the whole thing, unlovely, unromantic, even, oddly enough, passionless. It made sex look like some awful and tiresome chore. I suppose that might have been in consequence of the ‘acting’; that the people involved were engaged bodily but not spiritually or emotionally. Besides the whole thing was not even about pleasure; so far as I can see it was about degradation, the degradation of the women involved. We switched off after about half an hour, the mood of elation gone.

I’ve not got a lot of experience of hardcore pornography, but I don’t think the kind of thing we saw on terrestrial TV in Spain would be allowed in the England, even on specialist, subscription only channels. There may be other countries in Europe that allow this as a sign of the more relaxed attitudes towards sexual matters on the Continent; I simply don’t know. But it’s worth reflecting on the Spanish case in particular. There is a danger of over-intellectualising the matter – after all it may just be a question of ratings – but I rather suspect sex here, explicit sex in a popular medium, is as much about politics as anything else. More specifically, it’s a reaction against a highly conservative past.

It’s as well to remember that Spain was a dictatorship until the death of General Franco in 1975. Francoism was not fascism, as many people suppose: it was, rather, a reaction against the modern world. Franco’s victory in the Civil War had the effect of preserving Spain in a kind of limbo. It was to remain in a reactionary Catholic past for over thirty years while the rest of Europe moved in to a different world. In catching up it had to run twice as fast. Modern Spain came not to praise Caesar; it came to bury him. It buried him in excess.