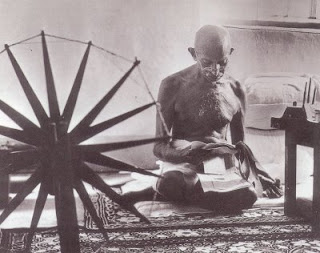 I’m going to have to ask my Indian friends to forgive me for what I’m about to write. I have no admiration at all for Mohandas Gandhi, a man whose influence on India was often more negative than positive, a man who by his politics and outlook did as much as any other to guarantee the tragic partition of 1947, a man even less relevant to modern India than he was to India of the past.

Yes, I know this is a dangerous step; I know it’s likely to make people angry with me because Gandhi is such a sainted figure, the father of a nation, the inspiration of the planet. Criticising him is almost as dangerous as criticising George Washington! Still, so far as I am concerned, the most perceptive comment ever made about the great Indian – I offer no challenge at all to his greatness –was that made by an Oxford academic when the Mahatma came to England in 1931 to attend the Second Round Table Conference. He compared him to Socrates “for absolute control and self-composure”, then added that for the first time in his life he understood why the Greeks made Socrates drink hemlock.

We all know about the saintliness, the generosity of spirit the admirable commitment to non-violence, which paradoxically was often the cause of more violence. His eccentricities are, perhaps, a lot less well known. He was a food faddist, the father of a thousand cults, and a man who’s much vaunted sexual abstinence led to some bizarre and eccentric behaviour. To make certain personal demands, to have the self-discipline to adhere to a particularly arduous and puritanical path, is one thing; it’s quite another when other people are drawn in. When one of his sons got involved in a fast he said that “if he dies in the process it will not be a matter of regret.”

In his own fasting there was, like so much of his political life, always an element of the theatrical, of showmanship, of the bogus and insincere gesture. His ascetic diet was extended to full-scale hunger strikes ‘to the death’, seventeen times in all, though as British observers wryly noted they never actually were to the death.

It’s perhaps no great surprise that Gandhi’s grasp of international politics in the 1930s was less than perceptive, given his close involvement in domestic affairs. Still some of his comments retain the power to unsettle. He made no distinction whatsoever between the benevolent imperialism of the British and the rapacious imperialism of the Germans and Japanese. He once said that he did not think that Hitler was as bad as depicted, and that the Jews rather than enduring Nazi persecution should commit mass suicide, which would rather have made the Holocaust an altogether less expensive affair. Worst of all was his demand in 1942 that the British leave India to ‘God or to anarchy’, when the Japanese were poised on the threshold. He seems to have been quite blind to the suffering that Japan had inflicted on China from 1937 onwards.

And then there is much-trumpeted personal poverty, his modesty and loin-cloth asceticism transmitted to all around. He always insisted on travelling third class when going by railway. This might have been admirable but for the fact that the Congress Party was obliged to dig into party funds to hire a whole third-class coach.

Of course the worse thing of all is that his politics, and therefore the politics of the Congress Party, drew heavily on Hindu tradition and religion. This would not have been bad if India had been a Hindu nation, but it was not. Gandhi unravelled a political style that made the substantial Muslim minority feel that a British raj was destined to be replaced by a Hindu raj. What India needed at that time in its history was a strictly secular party, one that did not allow religion to intrude in politics. Nehru had a far better understanding of that simple truth than Gandhi. But Nehru was only a politician; Gandhi was the Mahatma.

India is now one of the most dynamic and progressive nations in the world, one with a vibrant economy. It’s moved well beyond Gandhi’s spinning wheel ideal, which would have kept it locked forever in a semi-feudal past. Gandhi may be a great saint but it’s as well to leave such people locked forever in some irrelevant paradise.
Posted by Anastasia F-B at 15:37