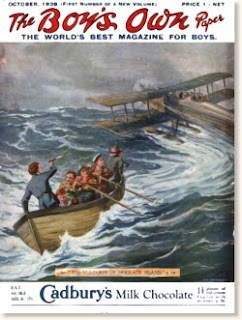 One of my favourite literary genres is the essay and my favourite writer in that genre has to be George Orwell. I’m thinking in particular of his piece on Boy’s Weeklies, a brilliant exercise in cultural sociology which reveals so much about a particular set of attitudes, of a past that is indeed a foreign country.

The parameters of the world he describes had been set even before the First World War, in the kind of fiction offered by the likes of G A Henty, Herbert Strang, Percy F. Westerman and Robert Leighton. The themes these authors preferred - tales of individual heroism against a late imperial setting- can be found in the publications Orwell discusses; weeklies like The Boy's Own Paper (which my father remembers with some fondness!), Pluck and The Boy's Friend.

So, the generation of 1914 grew up against the kind of plucky and chivalric sentiment expressed by Henry Newbolt in Vitaï Lampada, with war depicted in a uniquely English way as a game of cricket;

The sand of the desert is sodden red-
Red with the wreck of the square that broke
The gatling's jammed and the colonel dead,
And the regiment blind with dust and smoke.
The river of death has brimmed its banks,
And England's far, and Honour a name,
But the voice of a schoolboy rallies the ranks-
"Play up! Play up! And play the game!"

For some the actual experience of war, the unheroic ugliness of the whole thing, did nothing to moderate these fictional depictions. In 1915 Captain F. S. Brereton published With French at the Front, whose hero, Jim Fletcher, could have leaped straight out of the pages of Henty. He is killed in a German attack, calling on his men to fight "for the sake of old England." Inspired by his example the Tommies fight on "the thin khaki line of heroes, the cool, calm, cherry sons of Empire", beating back the Hun. It's romantic; it's glorious: it's a lie.

Brereton went on treating the war through a prism of rosy and heroic optimism. In his 1917 novel Under Haig in Flanders he paints a nice and cosy picture of life at the front, where the Tommies feed on "frizzling bacon, not to be beaten anywhere, bread that might have graced the table of a Ritz hotel, and jam that would have been the envy of any housewife." He goes on to depict the Battle of the Somme, with the great blood-letting of 1 July, one of the worst days in British military history, described as a "triumph for the Allies and a bitter blow to our ruthless enemy."

This kind of literature, and much more besides, clearly has a propaganda purpose, intended to attract more and more young men to the front with a promise of high adventure. The reality must have been truly shocking. But even after the war, when no further purpose was served by these fairy tales, the genre continued, largely unaffected by the revelations of Robert Graves, Wilfred Owen and Siegfried Sassoon. Brereton's novels remained in print throughout the inter-war period, and were popular as school and Sunday school prizes.
Posted by Anastasia F-B at 15:40