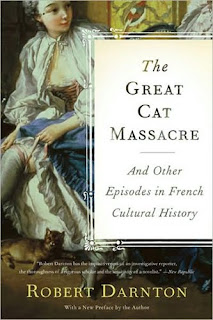 The setting is Paris in the 1730s, the Rue Saint-Severin to be exact, a printer's shop run by one Jacques Vincent to be even more exact. And as every story requires a hero so, too, does this one. There are, in fact, two heroes, heroes to be found amongst the lowest class of all - the shop's apprentices, a much abused class of humanity at the time. Their names are Jerome and Leveille. The lives they have are not to be envied. They sleep in a filthy and freezing room. They have to rise before dawn to be sent on all sorts of tasks. They are abused by all with the least power over them, from the journeymen to the master. Worst of all the food they are given to eat is not fit for human consumption, not fit even for...cats.

This is really a story about revenge, a story that points back to the superstitions of the middle ages and forward to the excesses of the French Revolution. Jerome and Leveille served an uncaring master, or bourgeois, as he was known to the workers in the printer’s shop, one who, along with his equally callous wife, cared more about cats than people. This passion for cats seems to have been a feature of the printing trade at the time. One bourgeois kept as many as twenty-five, having their individual portraits painted and feeding them on fowl. Jerome and Leveille, in contrast, had to live on whatever slops they were offered, scraps from the master's table. To make matters worse the cook often sold the leftovers, leaving them with old rotten bits of meat that even the cats refused to eat.

How these cats played on the minds of our heroes. Insulted and degraded by the presence of the household cat, including one known simply as La Grise (the grey), the mistress's favourite, they were kept awake at night by the howling of the alley cats on the roof above their bedroom. Unable to get a full night's sleep, they had to rise as early as four o'clock in the morning, exhausted at the beginning of the day and even more exhausted at the end of it.

One night they had had enough; they decided to take action in the most effective way they knew. Leveille was particularly talented as a mimic. He crawled over the roof to that part of the house where the bourgeois and his wife slept, presumably isolated from the usual cat chorus. Once there he howled and meowed so horribly that neither could get any sleep. After several nights of this they decided that they must have been bewitched. Orders were given to Jacques and Leveille, dogs rather than dogsbodies, to get rid of the cats.

They did, with all of the passion and exuberance they could muster, making sure that La Grise was drawn into the holocaust. But this wasn't simply an orgy of killing. Oh, no; for with the aid of the shop's journeymen the neighbourhood cats were rounded up to appear before the tribunes of the people. The cats were tried in accordance with the forms of process favoured by revolutionary tribunals, given the last rights and duly hanged on an improvised gallows. It was a cause of huge amusement, a diversion from the usual drudgery of the working day. In this workshop in this small quarter of Paris a prelude was acted out for a drama that was to come later the same century. The mistress came. She saw La Grise hanging from the gallows, retiring in horror. The workers had the day.

This bizarre episode, true in every detail, can be found in Robert Darnton's The Great Cat Massacre and Other Episodes in French Cultural History. It's taken from one Nicolas Contat, the Jerome of the story, who later set down an account of his life as an apprentice. There is so much richness here, so much which tells us about the politics and, more particularly, the attitudes of the day. A lot of the subliminal messages would have been better understood by a contemporary audience than a modern one. There is the obvious resentment of the workers against the bourgeois, the resentment of the abused apprentices against the pampered cats. But in sweeping up La Grise there were clear references to old witchcraft superstitions, clear references to the cat as a familiar and the mistress as a witch.

No matter that this was the Age of Enlightenment, cats still carried a long legacy of fear and superstition. In the carnivals held before Lent they were often subject to the same kind of treatment and torture that those accused in the Great Witch Hunt once were. The abuse and torture of cats was also a feature in the festival of Saint John the Baptist on 24 June. Then cats were burned at the stake by people hoping avoid ill-fortune for the rest of the year, a variation of the Scottish Taigherm of which I wrote recently. The scream of the cat, the Katzenmusik, was a background to much anarchy and jollity. Anarchy and jollity in death, a reference to the persecution of witches, a leitmotiv for the coming French Revolution.

For those who are interested on the folklore of cats, France and witchcraft I would highly recommend Ancient Sorceries, a wonderful story by Algernon Blackwood, along with M. R. James my favourite writer in the ghost and horror story genre.
Posted by Anastasia F-B at 16:46