Pax Americana, or the Illusion of Empire 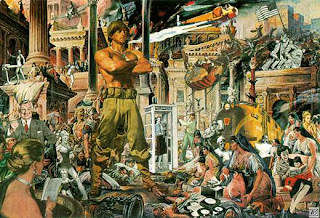 In the discussion pages of Blog Catalogue one user posted a question recently drawing a comparison between America and the Roman Empire, asking specifically if the downfall of the one is set to be repeated in the downfall of the other. I chose not to participate because it was clearly an American question pitched at an American audience. Still it’s worth thinking about this sort of thing, worth trying to interpret present events in the light of the past.

I have to say that there is not a strict comparison between the United States and Rome and that history does not always move in predictable cycles. The US is a nation state with a distinct identity and cultural unity, whereas Rome was a multi-national empire which was to fragment eventually under sustained external and internal pressures. Even so there is a growing sense that America, like Rome, has overreached itself in the exercise of new forms of imperial power, reflected most particularly in the recently published The Icarus Syndrome: How American Triumph Produces American Tragedy by Peter Beinart.

Interestingly the author originally supported the invasion of Iraq in 2003 though he now sees it as a major error of judgement, an error born of hubris. To that extent the American example bears comparison, at least in my estimation, with the Emperor Trajan’s invasion of what was then Mesopotamia in the kingdom of the Parthians. It was to take the Empire to its greatest ever extent but it was a step too far and too ambitious, a conquest impossible to maintain. Hadrian, his successor, was quick to recognise this in retreating from the east and beginning a retrenchment, a shoring-up of the existing imperial borders that in some ways was to mark the beginning of eventual decline.

Trajan had a vision of endless imperial greatness, a vision that turned out to be an illusion. George W. Bush had a vision, the vision of a Pax Americana. For him the 9/11 attack on New York was an “opportunity”, his own expression, to invade Parthia and reshape the whole of the Middle East. America could do this because America had the power and because the old Soviet Union, the one counter to imperial ambition, was no longer around. But like Icarus, as Beinart argues, America under Bush flew too close to the sun, tumbling sharply to earth in what now seems like endless conflict in an unstable region, from the Gulf to Afghanistan.

America needed a Hadrian to come in the steps of Trajan. Instead it got Barack Obama, who is realistic enough to recognise that there are limits to the exercise of imperial power but is tied to a course already set. Unlike Rome America will not fall; it will just get tired of playing a game that has no obvious end.
Posted by Anastasia F-B at 16:07