De Gaulle and the Myth of Resistance 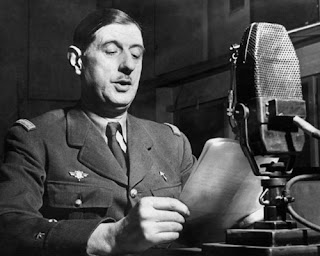 Tomorrow is one of the most famous days in French history. It marks the anniversary in 1940 when Charles de Gaulle appealed on BBC radio in London to his countrymen urging them to continue to resist the Germans, even though the government of the day had formally surrendered to the invading army. Famous, yes, an event being marked by commemorations across the land. President Sarkozy himself will attend a ceremony at Mont Valereien near Paris, where a memorial to the French Resistance is situated, before flying to London to visit studio B2, from where de Gaulle made his broadcast, saying, in noble words, that "Whatever happens, the flame of the French resistance must not and will not be extinguished."

There is only one small problem: it’s a myth. Oh, not the broadcast; that's real enough, something that happened because Winston Churchill, the prime minister, allowed it to happen in the face of opposition from the rest of the war cabinet. It's a myth because de Gaulle was probably heard by enough people to fill a village hall. The chances are, moreover, few of those who did listen on that bleak day in French history, when a great part of the nation was on the road fleeing from the German advance, had ever heard of this figure, a senior soldier but a minor politician. It's a myth - and here is the uncomfortable truth -because the vast bulk of the French population were relieved by the call for the armistice. The vast bulk of the French population rallied behind another soldier altogether and were to remain behind him for years to come. He was Philippe Petain, the new Prime Minister and subsequently head of the French state established at Vichy.

But history is often made retrospectively. De Gaulle, in the end, was on the side of the winners and Petain, Petain, whose side was he on? The losers, the answer has to come because he was tried and condemned as a traitor in 1945. But Petain was not Pierre Laval, who did more or less take the side of losers he believed were to be winners; Petain, rather like de Gaulle, took the side of France, though there are few now who would admit to this, preferring to sweep Vichy into a shameful oblivion. There is much about the Vichy regime that is shameful but the shame is not Petain's it is not even Laval's: the shame is France’s

No matter; in the end the obscure figure in London, stiff, totally lacking in humour, unimaginative and uncompromising came like a new Joan of Arc to save the conscience of the nation. He came in time to create the myth of resistance passing into shameful memory the realities of collaboration. Thus is history born; thus are nations made.
Posted by Anastasia F-B at 16:13