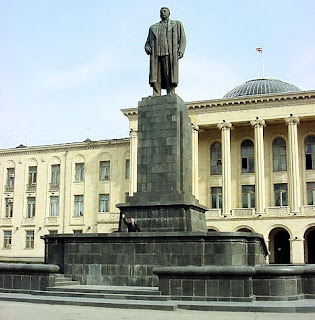 How are the mighty fallen

Stalin’s gone. For almost sixty years his giant statue brooded over Gori, the Georgian town where he was born, the son of a local cobbler, in 1878. It was the last survivor of an army of statues once scattered across the Soviet Union. One by one they went after Khrushchev’s denunciation of the tyrant; they all went with the exception of that in Gori, allowed to remain by special permission of the Politburo, a concession to a favoured local son, a concession to the only man in history who made Gori worthy of any note at all.

But he is favoured no longer. For Mikhail Saakashvili, Georgia’s pro-western president, the statue was an uncomfortable reminder of the past, a reminder, as he put it, of the Soviet occupation of Georgia. It’s as well to remember also, though no mention of this was made in the press reports I read, that it was Stalin who played a leading part in ending the independence of the first Republic of Georgia back in 1921.

His statue was removed without advanced warning in the early hours of Friday morning for fear of an adverse reaction by people, especially the elderly, who still revere their local hero, their own particular Satan. He is being moved to the Stalin museum, more of a shrine really. In his place Saakashvili plans to erect a memorial to the victims of Georgia’s brief war with Russia in 2008.

Commenting on the fall of their hero a spokesman for the Georgian Communist Party said that it was “in shock.” “The authority of the Georgian nation could sharply fall around the world as a result of this”, continued Soso Gagoshvili. I’m not often in a position where I feel that I am able to speak on behalf of “the world” but on this occasion I feel reasonably certain that “the world” could not care less.

I met a traveller from an antique land,
Who said—“Two vast and trunkless legs of stone
Stand in the desert. . . . Near them, on the sand,
Half sunk a shattered visage lies, whose frown,
And wrinkled lip, and sneer of cold command,
Tell that its sculptor well those passions read
Which yet survive, stamped on these lifeless things,
The hand that mocked them, and the heart that fed;
And on the pedestal, these words appear:
My name is Ozymandias, King of Kings;
Look on my Works, ye Mighty, and despair!
Nothing beside remains. Round the decay
Of that colossal Wreck, boundless and bare
The lone and level sands stretch far away.”
Posted by Anastasia F-B at 15:43