There was an article last year in The Telegraph on communist-era humour, a story I blogged about here at the beginning of October (No Joke). The old German Federal Republic intelligence services used to monitor and collect jokes from ‘across the wall’ as a measure of popular discontent with the Communist regime. Senior officials always looked forward to the latest compilation, not just for the information revealed about life in the east but for the simple amusement value.

The Trabi, the old East German car made from plastic and a prayer, was a popular source of humour. So, too, was Christmas. The holiday has been cancelled, one joke went, because Mary could not find any nappies (diapers) for baby Jesus, Joseph was called up to the army and the three kings didn’t get a travel permit.

Anyway, ever since I read this piece I’ve been assembling other examples, including this, a favourite of mine from the old Soviet Union;

Pravda announces the unveiling of a newly commissioned painting entitled Lenin in Zurich. The day arrives. All of the most important people are there, the members of the Presidium and the Supreme Soviet; Brezhnev himself is in attendance. The artist and the director of the Academy are on the podium, with the painting between them, covered by a small curtain.

The Director rises, welcomes the guests, and announces. “Comrades, I’m delighted to unveil this tribute to the great Lenin.” The curtain is drawn aside. There is an audible gasp from the crowd, followed by a stunned silence. The Director looks at the painting, which shows Trotsky in bed with Krupskaya, Lenin’s wife. He turns to the artist and whispers, “Where the hell is Lenin?” “Oh”, the artist replies, “Lenin’s in Zurich.”

Retarius, a friend of mine from Perth in Australia, one who introduced me to the blogging addiction, and with whom I share an occasional platform (Retarius and Anastasia), gave me one from Poland, also on the subject of sexual indiscretion;

A political organiser in a Polish factory in the 1970's is despairing over the indifference of his comrades to the great matters of state. One day he rails at them, demanding that they demonstrate their ideological preparedness by giving brief biographies of the senior party members. He asks them to speak about various ministers of State, all of whom his comrades apparently have never heard of. When they purport to know nothing of the career of the head of government he bursts out in exasperation: "You numbskulls!! If you spent less time boozing at home and more time improving your minds at political meetings you'd know who the most important people in our country are and why they're important!"

The ensuing, sullen silence is broken by a worker calling out, "If you're so well-informed, tell us about Krzysztof Novak." The organiser is bewildered. He's never heard of any bigwig with that name. He then suspects that he's being mocked; that this is an imaginary person. "There is no significant person of that name!", he retorts.

"Here is his significance", the worker says; "If you spent more time at home and less time at political meetings...you would know that Novak is the guy who is screwing your wife!"

It says something about people, of the capacity of people to adapt to the most adverse of circumstances, looking to deflate the pompous official lie, even if only the shape of a joke, perhaps the ultimate and most subversive form of personal freedom. 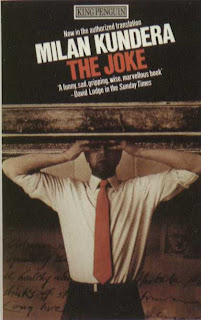