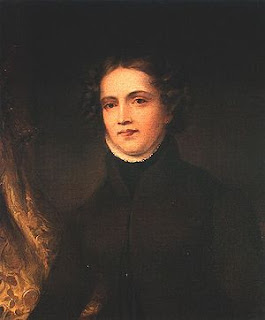 I freely confess that I know next to nothing about lesbian history though in terms of sexual preferences I’ve defined myself as bi ever since I was at school. The thing is I don’t really have an awful lot of interest in what I call ‘niche’ history, the history of shared identities or lifestyles, if I can put it like that. Not so long ago I tried to read Michel Foucault’s The History of Sexuality. I gave it up because it bored me rigid!

But thanks to BBC 2 I know something of the life Anne Lister, a remarkable woman, a landowner, a scholar, a free-spirit and a lesbian, open joyful and uninhibited. Born in 1791, Anne lived and loved in Shibden Hall near Halifax in West Yorkshire, a property she inherited from her uncle in 1826. She kept a journal in which her most intimate encounters were recorded in a code of her own devising, mixing Greek letters and algebraic symbols. Amazingly they were not fully deciphered until the late twentieth and even then were considered at first to be a hoax because the details of the author’s seductions were considered to be too graphic for the time!

The Secret Diaries of Miss Anne Lister, starring Maxine Peak in the title role, was broadcast on Monday evening. I had not long returned from a weekend away and was feeling quite tired but I was immediately captivated both by the story and by Peak’s performance. It was followed afterwards by a documentary on Anne’s life. Peak has said of this;

She was an extraordinary woman who, up to recently, has only really been documented in lesbian history. Hopefully, with this film and documentary, she will reach a wider audience exposing them to this inspirational and formidable woman. I am honoured but petrified to be embarking on the role of such a pioneering lady!

Anne was a contemporary of Jane Austen’s, but, my, it would not be possible to imagine two more different people, two more different writers. Both in their own ways were challenging the conventions of the day, Jane simply by being a writer at all. But while she depicted relationships of an entirely conventional and stiffly fastidious nature, Anne was giving free flow to thoughts and actions that not even a tolerant and understanding chap like Mr Knightly would have approved and understood!

Anne lived at a time when polite society would not have admitted lesbianism as a practice, let alone tolerate its existence. Still her sexual preferences were widely know, hinted at in the name of Gentleman Jack, given to her in some quarters. She seems to have been a singular-looking individual, one of mannish appearance, and certainly one of mannish tastes. At one point she recorded in her journal;

Yet my manners are certainly peculiar, not all masculine but rather softly gentleman-like. I know how to please girls.

Of that I have not the least doubt!

Anne was eventually to ‘marry’ Ann Walker, another wealthy heiress, whom she met in 1832. The two travelled to Europe together where Anne acquired an additional reputation, that of a mountaineer. Anne died, of all places, in Kutasi in Georgia while travelling with her wife. How unusual it is for me to write that – ‘her wife’-, it just seems such an odd conjunction of words! Ann Walker was devoted enough to her ‘husband’ to bring her body back to England for burial. I love pioneers of all kinds. I’m so delighted to have discovered the life of this extraordinary woman.