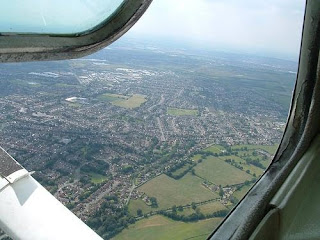 I said when I took the controls of the plane in my first flying lesson that I would be thinking of Amelia Earhart, the legendary American flyer, a person who’s become something of a personal avatar for me. Now after my second – even better than the first! – I thought I would add a few words in personal tribute to this wonderful woman, an angel from the age of flight exploration, who disappeared all those years ago.

I sometimes feel that I was born too late, born when all of the great challenges are over, born to walk in the paths laid out by others. Like Alexander, I have to say that there are no more worlds to conquer. But not so Amelia; she was born at just the right time, coming to maturity when so many new opportunities were arising. She grew up in the early years of flight and she became one of the great pioneers, all the more remarkable because she had to overcome established prejudices against women entering any ‘masculine’ field.

She did not just become a flyer; she became one of the best, forever looking for new challenges, always looking to overcome obstacles. This was the thing that made her great even if her daring, her desire for adventure, killed her in the end. She broke so many records, being the first aviatrix to fly solo across the Atlantic, for which she was awarded the Distinguished Flying Cross, the first of her sex to receive this distinction.

She became a best-selling writer, pushing the aviation message wherever she went, encouraging more and more girls to take up flying. She was instrumental in the founding of the Ninety-Nines, an organisation for female pilots. For Amelia, for me also, there had to be more to life than being a passenger. She disappeared in July 1937 in attempting to make a round the world trip in a Lockheed Model 10 Electra. An Electra, so terribly apt, recalling one of the most determined women from Greek mythology.

Courage is the price that
Life exacts for granting peace.

The soul that knows it not
Knows no release from little things:
Knows not the livid loneliness of fear,
Nor mountain heights where bitter joy can hear the sound of wings.

Nor can life grant us boon of living, compensate
For dull gray ugliness and pregnant hate
Unless we dare
The soul's dominion.
Each time we make a choice, we pay
With courage to behold the resistless day,
And count it fair. 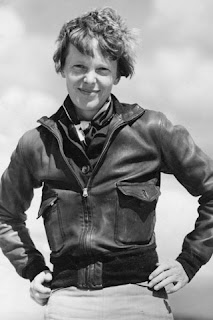 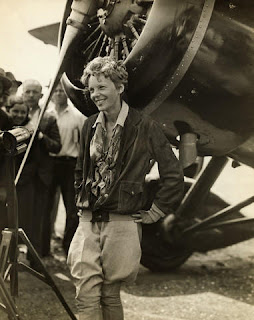