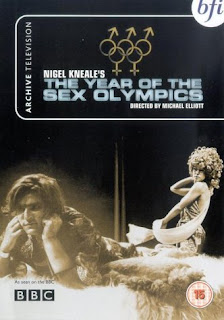 In my English Lit. class at school one of the most enjoyable papers I ever wrote was on dystopias. I had by that time already discovered George Orwell so Nineteen-Eighty Four was an obvious point of departure. From there its was on to novels like Aldous Huxley's Brave New World, Yevgeny Zamyatin's We, a book that overwhelmed me with its brilliance, Ray Bradbury’s Fahrenheit 451, Anthony Burgess’ A Clockwork Orange, G K Chesterton’s The Napoleon of Notting Hill and Andrei Platonov’s The Foundation Pit.

But the other girls in my group were reading the same books so I thought I'd cast the net just a little wider. And that's how I discovered The Year of the Sex Olympics, a play by Nigel Kneale and first broadcast on BBC television in 1968. I was immediately captivated by this depiction of a future in which a debased underclass are kept amused by reality TV shows and pornography, ever more sensational in content, like the Sex Olympics. The elite were always looking for new ideas and are encouraged when the masses, ever more lethargic, ever more difficult to please, are engaged and amused by death and suffering.

Reality TV at the time was non-existent, so the play could be considered as a brilliant anticipation of times to come, of our times, a time when television shows are becoming ever more wretchedly debased in their pursuit of ratings. But I suspect that the author, who had previously adapted Nineteen-Eighty Four for television, was also looking back to the public executions of the past, which used to draw massive crowds, people taking a vicarious delight in death. The premise was based, if you like, in the vilest dimensions of human nature.

The theme had a particular resonance for me because of the popularity of Channel Four's Big Brother reality show, drawing on Orwell, though in such a way that I feel sure would have nauseated him. I confess I was seduced by this show to begin with, seduced by characters like 'Nasty Nick' (Sorry; I was in my teens!). But with each successive series my contempt for the parade of mediocrities that were selected to appear began to grow. I have to say this, even at the risk of sounding snobbish, but I began to think of them as the worst forms of low-life imaginable, 'oiks' and 'pig people', as we used to say at school.

The worst of all was the celebrity versions. There was one with George Galloway, then an MP, doing an impression of a cat and another of him dressed in a tight-fitting leotard, with, not to be coy on the point, his testicles on clear display. To see this revolting old man, one whom I despised for his politics, prancing around like this was just too, too awful, hugely funny and utterly ridiculous at one and the same time. I haven't watched the show since.

I almost never watch TV now; I have far more important things to do. It's not just that. The fact is that the mixture of reality TV, celebrity chefs, talent contests and the rest of the sad and unimaginative rubbish is simply unwatchable. It's garbage best left to the proles, people whose surplus energy is sucked up by a manipulating and cynical elite. Meanwhile I shall return always to the Live Life Show. :-)