Health to your spirit, dear lady 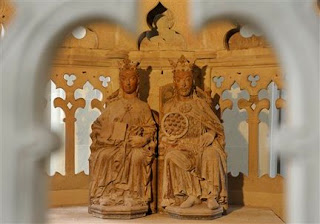 In January I wrote a blog about tests being carried out by the University of Bristol to determine if a 1000 year old skeleton, discovered in Magdeburg Cathedral in 2008, were those of Eadgyth or Edith, an Anglo-Saxon princess (Ferthu hal, Eadgyth) Here is what I wrote in my opening paragraph;

Well, it is! The tests have now proved conclusively that the bones belonged to a woman who grew up in the ancient kingdom of Wessex. Professor Harold Meller, the director of the project, has said of this;

Medieval bones were moved frequently, and often mixed up, so it required some exceptional science to prove that they are indeed those of Eadgyth. It is incredible that we have been able to do this using the most recent analytical techniques.

The remains were thought to be lost forever in 1510 when they were last moved and that the monument in Magdeburg was merely a cenotaph in her honour. Not so; she was there, resting down the ages. Once again, health to your spirit, dear lady.
Posted by Anastasia F-B at 16:35