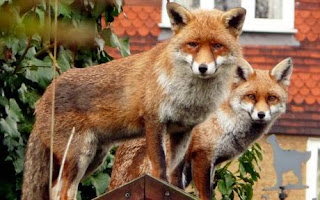 If I were to try to think of people I would favour for an Orwellian style two-minute hate there would be no shortage of candidates. The whole line up of deadbeats and mediocrities from the present Labour Party leadership contest would be an obvious choice, particularly that awful fat hypocrite Diane Abbott (just imagine that as prime minister) or ‘Deadward’, the Milband double act that calls to mind those talentless losers ‘Jedward.’ But no, the way I feel at the moment it would have to be just about anyone involved in animal rights.

Oh, gosh, how I hate these trendy, do-gooding urban lefties, people who know almost nothing of the country, people responsible for even more suffering than they pretend to alleviate. The fox-hunting ban – which is totally ineffective – has actually brought more suffering to these animals, not less, as many are disposed of in hideous ways.

But it’s not really country foxes that I want to talk about, no, it’s their urban cousins, the pizza and burger migrants, as I like to think of them. So much additional information has come out on these vermin – a word I use in a strict, descriptive sense – ever since two babies were savaged in their home in London's Hackney district. There are some interesting snippets in the last weeks issue of The Spectator, details I will risk repeating for those who do not read the magazine.

Charles Moore in his Notes tells of an encounter a gamekeeper he spoke to had a few years ago. The man came across a large van that had broken down on a country road. While helping the driver to get it restarted he noticed a rank smell coming from the back. “What is it you have?”, he asked. “Thirty live foxes”, the driver replied. They had all been collected in London and the man had instructions by the council authority in question to take them into the countryside and release them. The keeper asked him not to do this because not only would they spread mange but that they would also die cruelly in an alien environment. In responding the driver said that he was obliged to follow instructions. At once, under the pretence of getting more help, the keeper called a friend, asking him to bring his guns. The driver was then persuaded to allow them to shoot as many of the foxes as possible, the only humane solution, as Moore concludes, to a problem caused by ‘animal lovers.’

Even better is Melissa Kite’s account of her experience with an official of Lambeth Council Pest Control. It was a few days before the attacks on the babies turned the problem of urban foxes into a hot topic. She called the council because she was worried by the number of foxes wandering down the street “like hoodies”, as she puts it. In short, she wanted the council to issue an animal Anti-Social Behaviour Order! “We don’t remove foxes”, she was told, “but we give advice on how to deter them. If you have a family of foxes living in your garden I can send you information.”

Rather shocked by this revelation she said “Wait a minute. Do you mean that to tell me that some poor sods have whole families of foxes living in their gardens? Because I’m just complaining about them sitting on my doorstep.”

Bit by bit it got worse. The official in question said that her job was to catch dogs and that if she started to trap foxes she would be doing it all day long, surely an indication of just how bad things have become. When Kite, now clearly overcome by a mood of ironic frustration, said that while the council did not want to harm the foxes for reasons of ignorance and political correctness would they mind most awfully if she dealt with the problem herself. After all, as she explained, they are vermin.

“They’re not vermin”, came the response. “You can’t kill them. The RSPCA would do you for cruelty if you trapped them, you would be liable to prosecution.”

“And if one attacked a baby?”

“I don’t think there is any risk of that.”

As I have said this was a few days before the mauling of the baby twins, sleeping in their cots in their own bedroom. Kite gave up in frustration but agreed to the offer of a helpful leaflet to be sent in the post. This added to the general craziness, explaining that the fox was a member of the dog family and that small family pets can form a part of its ‘natural’ diet. It was illustrated with a cartoon strip showing a family of foxes frolicking in a garden. A checklist on dealing with a fox invasion recommended some £15,000 of renovations to one’s house and garden. Yes, indeed, £15,000.

In the meantime, the advice continued, if one happens to find a fox hole in one’s garden one must place twigs across the entrance and check it daily. Only after three days and nights have passed without disturbance is it permissible to fill the hole, unless, of course, its the period from February to April, when the hole has to be checked for ten days in case there is a breeding vixen inside. Yes, this is how crazy things have become.

Speaking of pets, I remember once when we came back from holiday when I was about ten or so looking out on to our back garden, there noticing a mound of fur in the middle of the lawn. When father went out to investigate he discovered the bottom half of a rabbit. The top part, including the head, was missing. Subsequent to this one of our neighbours told us that some children, people I knew well, had been going around asking if anyone had seen their pet rabbit. We knew we had a fox problem, so the connection was obvious. Father was left with the unpleasant task of going to speak to the children’s parents.

Foxes are vermin, a danger to people and to pets alike; they should be treated like vermin. In the country fortunately they still are.
Posted by Anastasia F-B at 15:57