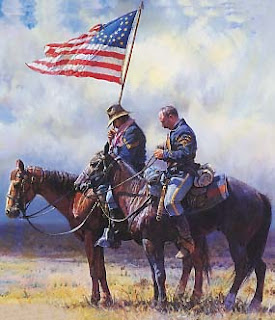 When it comes to historical topics I often find the small details more compelling than the overall picture, the details that reveal some feature or other of past lives. I have a copy of Nathaniel Philbrick’s recently published The Last Stand: Custer, Sitting Bull and the Battle of the Little Bighorn. It’s about one of the seminal conflicts of the Old West, the day in June 1876 when units of the Seventh Cavalry, led by George Armstrong Custer, were overwhelmed by a larger force of Sioux and Cheyenne Indians (I simply refuse to use the term ‘native’ Americans).

The big picture is exciting, yes, but in glancing through the pages I became engrossed in the information he gives on the lives of the ordinary troopers. Many of them were born abroad, the highest proportion of the foreign contingent coming from Ireland, the Germans and the English following on. Most of the native Americans – and here I really do mean native! – came from east of the Mississippi and had no real idea of what life would be like in the West, with its endless and monotonous plains.

That was bad enough but they apparently also found it difficult to accustom the constant reek of horse-hair and human sweat. At night the smell could be particularly bad, compounded by the fact that latrines had to be dug close to camp. If the soldiers died with their boots on it’s simply because that they were often too frightened to take them off. As any rider knows boots have a tendency to shrink when damp or wet, making them difficult to get off and just as difficult to get on. For men who had to be ready at a moment’s notice this was of particular concern.

It occurs to me also, though the author makes no mention of this in the passages I’ve read, that the day of the battle may very well have been the first time that many of the troopers had ever seen an Indian. Contrary to popular legend they were not quite as numerous as supposed and the plains were vast. For most soldiers stationed on remote frontier posts the greatest enemy was boredom and the only solace drink. It was a case of dancing with the devil more than dancing with wolves.
Posted by Anastasia F-B at 16:45