The Return of the Fairy 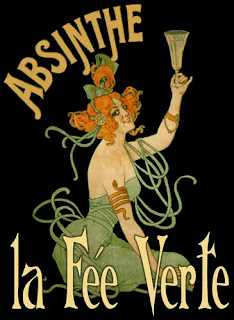 I was lunching with some friends in Montmartre last summer, a very pleasant occasion. I decided at the end of the meal, in an act of sheer devilment, to ask for a glass of absinthe. I might have well asked for hemlock! The thing is, you see, as I very well knew, absinthe, the drink of La Belle Epoch, has not been available in France in its pure form for close on a hundred years because it was believed to be almost as lethal as hemlock. That lengthy prohibition may about to be lifted.

I’ve written before about absinthe (The Green Fairy) and its associations with decadence and witchcraft. It was the favoured drink of artists such as Vincent van Gogh, supposedly inspiring Starry Night among other paintings, and writers like Oscar Wilde. But the fairy could just as readily turn into a demon, so it was believed, the nightmare that walks the pages of Zola’s L’Assommoir, one of the best of his Les Rougon-Macquart series of novels. In a mood of moral panic, no doubt intensified by the atmosphere of the war, the French government banished the Green Fairy in 1915.

Although restrictions were lifted somewhat in more recent times, it can still only be sold if called an ‘absinthe-based spirit’ and made to a slightly different recipe. But according to report I read in the press Franck Choisne, who owns the two-hundred year Combier distillery in the Loire Valley, a place where the secret of the original recipe is still preserved, is leading a campaign to bring it back. He has been joined Ted Breaux, an American connoisseur, who succeeded having the ban lifted in the United States.

As we now know that the original drink was no stronger than whisky and that the herbs it contained would have to be consumed by in gargantuan quantities before any harm was caused, it’s likely that the French parliament will vote to end the ban. It seems a pity, though, that the mythology is likely to die with it, or perhaps it’s just reassuring to know that genius is its own absinthe.