The Chariot of Artemis 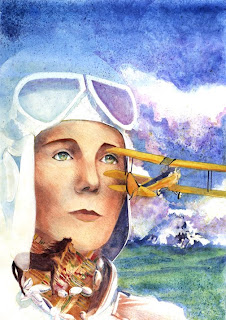 Physically I landed back on earth more than twenty-four hours ago but my head is still the sky! (So what’s new?!) I really am lost for words, no matter how obvious and clichéd that sounds. To say that it was everything that I hoped for would be a gross understatement. I’ve seen Kent and Sussex from the air many times on the approach to Heathrow, but never like this; never have those towns, those farms, those spires, those blue remembered hills looked so beautiful. The little plane was beautiful, too, the little Cessna, the chariot of Artemis.

My pilot instructor was so good, proficient, calm, reassuring...and cute! I was nervous to begin with, particularly just before I took the controls, a point when my heart was like some crazy bird trying to escape from the prison of my ribs! But no sooner did I have the power; no sooner was I in control than it all went. It was just so smooth, much smoother than the first time I took control of a car. Prior to this I kept a close watch on my instructor’s movements, careful, no sudden jerks, just steady and light.

Afterwards I was told that I had done extraordinarily well, that I was a ‘natural.’ I honestly don’t think this was a sales pitch because the future lessons have all been paid for! I’m going to go on to the end. I’ll need another forty-four hours before I can apply for my PPL – private pilot’s licence. Once I’ve started something I don’t finish until I have reached my desire.

I’ve discovered a new passion, and when I discover a passion it really as if nobody has ever been there before me. In that respect I’m pretty much like dear old Toad of Toad Hall.

Glorious, stirring sight! The poetry of motion! The real way to travel! The only way to travel! Here today--in next week tomorrow! Villages skipped, towns and cities jumped--always somebody else's horizon! O bliss!