What about every other Bloody Day? 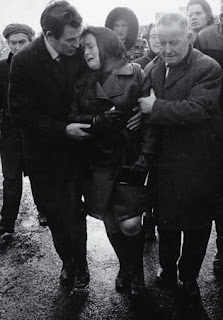 Lord Saville’s inquiry into the Bloody Sunday shootings in Northern Ireland is scheduled for publication tomorrow, the fruits of a promise made twelve years ago by Tony Blair to ensure that the likes of Gerry Adams and Martin McGuiness signed up to the Good Friday agreement. Indications are that this exercise in gesture politics has cost close on £200million, and for what? To turn British soldiers into possible scapegoats, at least according to advanced reports that I have read.

After all this time, effort and expense we are no closer to the truth of what really happened on that day in January thirty-eight years ago, as Douglas Murray says in this week’s Spectator. In no way do I wish to minimise the tragedy but any objective assessment would have to conclude that the innocent victims were caught in crossfire; that they were effectively used as a shield by the IRA, which has never admitted any responsibility for its actions.

There is unlikely to be any closure here, just deeper and deeper wounds. The whole inquiry, it seems to me, was little better than an act of appeasement, one that may very well open up the prospect of criminal proceedings against former soldiers of the Parachute Regiment. I’m sure all serving soldiers will be mindful of the precedent being set here.

There are indeed times when the dead are best left to bury the dead, times when a tragic past is best forgotten. Otherwise all sorts of additional issues might be raised, old ghosts released from the grave. Now we have former terrorists in government in Northern Ireland; now we have convicted IRA killers set free. How will it sit with the British people, Murray asks, if British soldiers are sent to prison against that background? Perhaps they will remember the words of a former commander of 1 Para;

Justice, it would appear, is a one-way street. It seems such an obvious point to conclude on but sometimes the price of peace is just too outrageously high.
Posted by Anastasia F-B at 12:09