The Shadow of Stalin 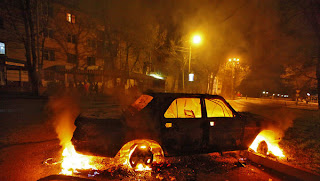 Sometimes news reports offer information without enlightenment. The case I have in mind is the present ethnic violence in Kyrgyzstan, the former Soviet republic in Central Asia. So off I went looking for roots in history, for roots in history there surely are.

The main point is that this country, like its neighbours, is essentially an artificial creation, carved out, so to say, by the Soviet authorities in the early twentieth century; carved out by Stalin in his role of Commissar for Nationalities. The Russians had originally expanded into this area as part of a colonial drive in the nineteenth century, there to counter British expansion in India towards the frontier of Afghanistan, an act in what was known as the Great Game. At the time the area was made up of three long-established political units - the Khanates of Kokand and Khorezm and the Emirate of Bukhara, all of which were abolished. It was the Soviets who turned what was effectively an undifferentiated Tsarist colony into a series of 'countries', Kazakhstan, Uzbekistan, Turkmenistan and Tajikistan along with Kyrgyzstan. It was an entirely arbitrary exercise based purely on the language and character of the dominant ethnic group.

The problem here was a simple one, sublimated by the Soviet dictatorships: these countries, created by bureaucratic edict, had virtually nothing in the way of national consciousness. They really only existed, in other words, by the exercise of strong central control, which continued even after the collapse of the Soviet Union when various authoritarian regimes and dictators emerged.

The instability in the region is one of the abiding legacies of Stalin. Not only did he help draw up the borders but he was later responsible for the almost total destruction of the local elites, the very people vital in the creation of any kind of national consciousness or legitimacy. He compounded the problem by destroying local Islamic tradition, a relatively liberal school influenced by developments in Turkey and India, opening the way to the import in the present day of more extreme missionaries in the fundamentalist mould.

So, with no national tradition, a weak elite, no coherent faith-based identity the Kyrgyz and the Uzbeks, the main minority group, are like oil and water, existing side by side but never blending. The overthrow of President Kurmanbek Bakiyev in the April riots against corruption and increased living expenses effectively brought to an end the central control that managed to hold the country together. The situation was similar in some respects to that in the former Yugoslavia in the 1990s, particularly in the state of Bosnia, where ancient rivalries emerged with the end of political unity. In Kyrgyzstan, around the southern city of Osh, the minority Uzbeks have become a target of Kyrgyz gangs with the government losing control. In essence we have a nation that never was a nation disintegrating into its constituent parts.

As I write the prospects are unclear with a full-scale civil war a distinct possibility in what is one of the most politically and ethnically sensitive regions on earth. So far the Russians have refused to intervene in spite of requests from a government that has effectively lost control. I honestly don't see how they can stay out for much longer given the implications for their own security if instability spreads throughout the whole southern region. In a sense Vladimir Putin was right that the disintegration of the old Soviet Union was a geopolitical disaster, but perhaps not in the way that he meant. The Soviets both created a problem and offered a solution to a problem. Stalin casts a long shadow.
Posted by Anastasia F-B at 16:00