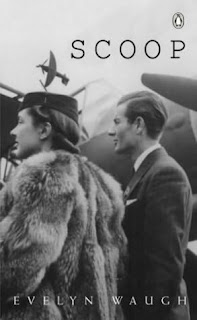 This is a review I wrote for the Bright Young Things group on Goodreads, which this month will be discussing Evelyn Waugh's novel Scoop.

There is a story that has long since entered into the mythology of journalism. It concerns William Randolph Hearst, among the most unscrupulous of the press barons, for whom newspapers were not so much a source of information but an expression of his personal power. After the beginning of the Cuban struggle for independence against Spain in the mid 1890s he was active among those pushing for American intervention, seeing war as a way of selling even more newspapers.

The artist Frederick Remington was sent to the island to provide Hearst’s New York Journal with illustrations. When he arrived in Cuba he cabled back, saying that all was quiet, that there was no war in sight. Hearst response was “You supply the pictures, I’ll supply the war.”

True or not it’s a story about the power of the press and the ability of unscrupulous publishers to ‘manufacture’ news. I was reminded of it immediately on reading Evelyn Waugh’s novel Scoop, a satire centring on the pursuit of a non-existent story about a non-existent war.

To begin with I should say that I have not read an awful lot of Waugh. The truth is I’ve never really warmed to him as a novelist and a story teller. As a writer he shows tremendous technical proficiency, and Scoop is probably as good as he gets. But I find his style, the way he approaches his subject, tiresomely superficial. I quite liked Brideshead Revisited but I found the comedy in Decline and Fall unfunny and forced, so much so that I gave up reading after a few dozen pages.

Scoop is also a comedy, one that worked much better for me than Decline and Fall. It’s a reasonably effective expose of the absurdity of the press and the arrogance of newspaper owners. Lord Copper, owner of The Daily Beast, serves here in the role of a fictional Hearst. Hearing rumours of war in the fictional African republic of Ismaelia naturally he wants The Beast to get the scoop. Having been told that there is a man by the name of Boot ideal for this kind of assignment he arranges to have him sent to Africa. The problem is he and Slater, the foreign news editor, send the wrong Boot! They send the Beast’s nature correspondent William, a man more used to voles and lush places.

William is hopelessly out of his comfort zone but by a mixture of good fortune and good contacts he manages to get the story that isn’t a story, a scoop that isn’t a scoop. Yes, the press can work like that, spinning something out of nothing, though more in the days of Beaverbrook and Northcliffe, the British equivalents of Hearst and most probably the models for the frightful Lord Copper.

So, that’s it, part satire, part comedy of errors. It’s light and easy to digest, a book probably more for its time than ours. Some smiles, a few laughs, some interesting comic situations, a satire without any real bite. It’s quickly read and just as quickly forgotten. According to the Wikipedia article it was included in The Observer’s list of the hundred greatest novels of all time. So, it’s one of the hundred greatest novels of all time; really? Well, if The Observer’s readers say so who am I to argue. :-)
Posted by Anastasia F-B at 11:34