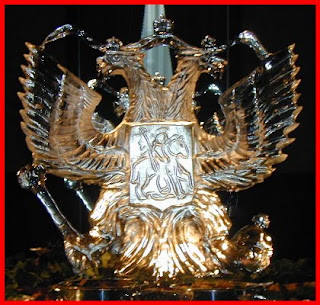 In her Molotov’s Magic Lantern – A Journey in Russian History Rachael Polonsky describes coming across what she describes as a ‘creepy’ book in the Lenin Library in Moscow. It’s called The Formation of the Russian Character on the Example of the Historical Fate of the Staraya Russa Region, published in 2003.

In this she discovered that Staraya Russa, the setting, fictionally disguised, for Dostoevsky’s The Brothers Karamazov and the place were he completed Demons, is being used to cultivate a mystique, to serve what she describes as “Russia’s new era of Orthodoxy, Autocracy and Nationality.” This quiet backwater, the very heart of the old Orthodox Rus, has become the heartland of a kind Slav version of a blut und boden mythology.

The book was published under the auspices of the FSB, the successor to the old KGB, the security apparatus from which Vladimir Putin emerged. It comes with the approval of all sorts of people, soldiers and security specialists, detailing, as it does, the primal superiority of Russia, her God-bearing mission, all proved by the presence of salt in the soil of Staraya Russa, the ancient homeland of the Rus, who are the "salt of the earth."

The book, according to Polonsky, is full of all sorts of bogus claims backed up by ‘scholarship’ of the most tendentious kind. Putin is mentioned every few pages, his name invoked in ever more reverential tones. The hagiography also draws on a spurious etymology, even associating the root of the name Putin with Christ himself!

There is something odd happening in Russia, a kind of regression, if I can put it like that, though into what I have no clear idea. All I can see is the outline of some peculiar hybrid, uniting elements that are uniquely Russian, even if they are as contradictory as Stalin and Dostoevsky, paganism and orthodoxy.

Russia is clearly attempting to ‘rediscover’ itself, a rediscovery that appears to be based on some highly dubious ideological foundations. It’s perhaps not too outrageous to suggest that there may even be a place for the Black Hundreds, the notorious anti-Semitic and ultra-nationalist movement of Tsarist days, in this witches' cauldron.

I admire Russia; I admire its history and its culture. It’s also true that every country relies on myth to some degree or other in upholding the idea of nation. But the country seems to be heading in a somewhat perverse direction, evidenced by the current prosecution for blasphemy of the organisers of an exhibition of modern art, headed by Yuri Samodurov, accused by a group of militant religious radicals who claim to be backed by the Orthodox Church. What they most certainly have is the support of the state prosecution service, which has agreed that the Sakharov Museum, where the exhibition was held, is guilty of “anti-state” and “anti-Orthodox” activity, an unusual return to a distant past.
Posted by Anastasia F-B at 15:33