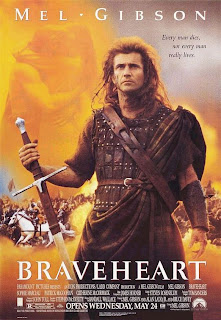 I love history and I love movies, my twin passions, if you like. I’ve seen some truly excellent films that deal with historical subjects, using a high degree of verisimilitude. For example, I think that Michael Caton-Jones' movie Rob Roy is a reasonable depiction of political and social conditions in early eighteenth century Scotland. There is only one small point I would take issue with, where Rob is shown riding a horse wearing a kilt. Now anybody who knows anything about riding, about the male anatomy and about how kilts were worn, will understand why the Scots gentry invented trews, the narrow trousers worn as an alternative to the kilt!

But it’s really another movie dealing with a Scottish historical subject I have in mind, Mel Gibson’s much-lauded Braveheart, which purports to tell the story of William Wallace, the great William Tell-like hero of the medieval Scottish Wars of Independence. Andrew Carson, a fellow blogger and friend, made some fairly damning criticisms of this movie in a discussion on BlogCatalogue, criticisms which I fully agree with. I’m glad he did because he’s also a Scot and I was under the impression that all Scots loved this depiction of their national epic, an impression I gathered in visiting the country over the years. But now he’s broken the ice, so to speak, an Englishwoman can, at her peril, enter the waters!

I know it’s only a movie, it’s only entertainment. Right, now I’ve got that out of the way I can say what I really think, and what I think is that the history is dramatic and exciting enough without this awful pastiche. The English soldiers, draped in some comic opera armour, are just pantomime villains. Yes, I know, I was bound to say that. But what I don’t understand is why the Scots, most Scots, allowed themselves to be seduced by this caricature. It’s almost like black people seeing their own history through the medium of the nigger minstrel shows of old.

The inaccuracies are too numerous to mention. The whole movie was clearly aimed at confirming the preconceptions of a chiefly American audience; and when the Americans think of Scotland what they think of is Highlands, tartans and clans, what I call the Brigadoon image. But the men who fought with Wallace, and then Robert Bruce, were mostly drawn from the Lowlands of the south and the east. They were not clansmen at all and they most assuredly did not wear tartan. Indeed some of the staunchest enemies of Bruce in particular were Highlanders.

Perhaps the most ludicrous suggestion was that Wallace had a sexual relationship with Isabella, princess of Wales; that he was the father of her child. It doesn’t really matter that he was dead before she came to England. What does matter, what Scots should be aware of, is that this would make Wallace the father of Edward III. In other words, one of Scotland’s greatest heroes is suggested as the father of one of its greatest enemies!

I really don’t want to belabour the point and it is possible to enjoy the movie at the simple level of cartoon-style entertainment; all good on one side, all bad on the other. I’m blessed, or cursed, you chose which, with a kind of sensitivity to historical subjects that makes such uncomplicated enjoyment all but impossible. Still, I’ve been fairly mild here, pulling my punches where I can pull punches. You don’t really want to know what I think about To Kill a King, set in the English Civil War!
Posted by Anastasia F-B at 16:06