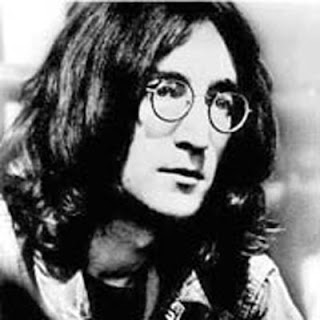 There was a feature article in Saturday’s Daily Mail on the Beatles, this year marking the fiftieth anniversary of the band’s formation in Liverpool in the summer of 1960. A few days before this BBC4 broadcast Lennon Naked, a drama starring Christopher Eccleston in role of John Lennon.

Although I was certainly familiar with the Beatles’ music when I was growing up for me they belonged to a different age: there and not there, innocent, rather silly and awfully dated. I can recognise the unique talents of the song-writing partnership of Lennon and McCartney, musical giants compared with so much of the Jedward-style pap that’s on offer today. Even so I find the fanatical adulation that the band conjured up wholly bewildering. Perhaps it was just the sign of a time that in my mind’s eye I see through the medium of black and white news footage.

And then there is John Lennon, a man with an acid wit, a man with huge creative talents, a man…with a chip on his shoulder as big as all of Merseyside. Christopher Eccleston was certainly good in the part, though, to be frank, he seemed just a bit too ancient to be playing the mop-head of the early 1960s. But, my, was this really what Lennon was like, this self-absorbed, selfish, conceited, egotistical bore and, what is worse, a humourless egotistical bore?

One has to be careful with biopics as they are a little like biopsies: even if wholly accurate one is merely shown a limited cross-section. Lennon Naked, presented as part of the BBC’s fatherhood season, was really about abandonment, about the trauma Lennon suffered for most of his life after being deprived of both his father and his mother at an early age. The legacy was one of anger, particularly with his father, as the drama showed at length. Yes, I can see that in Lennon’s case that the child was truly the father of the man; I can see that he felt betrayed. Even so I found this bitter, ranting, cruel, cynical and puerile man really quite repellent as he was depicted. In the end he treated his own son Julian no better than his father had treated him.

On a wider point for me Lennon the message, as opposed to Lennon the medium, is all wrong. When I was in my teens his song Imagine came top in a list of the hundred greatest pop songs. I hate it, I absolutely hate it; I hate the lazy, utopian sentiments behind it, this Communist Manifesto turned into a lullaby. I don’t need to imagine what Lennon-world would be like; I saw traces of its aftermath in a land scarred forever by Year Zero and the ‘brotherhood of man.’ No hell below us; just hell on earth.