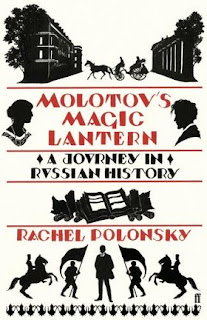 I mentioned the other day that I had just finished Molotov’s Magic Lantern – a Journey in Russian History by Rachel Polonsky. This is one of the books that Orlando Figes, another specialist in Russian history, tried to cheapen by an Amazon review, written supposedly by his wife, while talking up his own work. The whole affair was really quite sad because he is a decent historian, one whose work stands on its own merits, one who did not need to attempt assassination by review. Being a decent historian, sadly, is no guarantee against being a foolish human being.

Molotov’s Magic Lantern is a superb piece of work, idiosyncratic, playful and learned. It reminds me in some ways of Rebecca West’s Black Lamb and Grey Falcon in that it is also part travelogue, part history and party intellectual exploration, though Polonsky is far less intense than West.

Her quest, yes, it’s also a kind of quest, begins from an apartment block in Romanov Lane in Moscow, centred in an elite district, the home of important officials in both Tsarist and Soviet times. There she found herself staying beneath the apartment once occupied by none other than Vyacheslav Molotov, once Stalin’s foreign minister and collaborator in the great tragedy that overtook Russia in the 1930s. After he had been expelled from the party during the days of de-Stalinisation his wife made a personal appeal to Khrushchev for his readmission. In response he took her to the state archives, there showing her the numerous execution lists her husband had signed.

But the paradox, the great paradox of the twentieth century, is that Molotov was no brute, as Polonsky discovered after she was allowed to explore his empty apartment. There she found not just his magic lantern but the remains of his library. She discovered that the monster was a bibliophile with a particular love of Chekhov. A lot of the books in the collection had been annotated by him in person. This is the heart of the paradox- humane, erudite and, yes, even loving people, people like Molotov, can be dehumanised by an almost total failure of the imagination, an inability to empathise with real people, people beyond the pages of books; dehumanised in the name of a human idea.

Having thrown a stone into the pond Polonsky follows the rings out across Russia; from Taganrog in the south, where Chekhov was born, through Novgorod the Great in the west, to Murmansk in the north, all the way east to Lake Baikal in Siberia. She moves outwards and inwards at the same time, exploring the history of a people and its culture through places.

The book is far from exhaustive and it is by no means a history of Russia in the most complete sense. Still less is it a biography of Molotov, who is at best of incidental importance. It’s her journey, and where she stops, in both place and time, is largely determined by personal reasons. Though she takes nothing for granted it helps, at least I believe so, if one has a little background knowledge. It’s not absolutely necessary; it just makes a reading a little bit richer.

Molotov’s Magic Lantern is a clever, bold and imaginative book with just a soupcon of whimsy, a celebration of greatness and a lament for a tragedy, so much a part of the epic that is Russia.
Posted by Anastasia F-B at 15:47