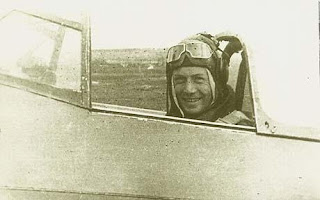 I don’t generally read obituaries. To be more exact, I don’t think I’ve ever read one right through. I did on Saturday, though, for two reasons: the obituary was about a pilot and I have a slight obsession with all matters relating to flying and aircraft at the present. But it wasn’t about just any pilot, no; it was about a French marquis who flew a Yak fighter alongside the Red Air Force during the Second World War. Reading these outline facts I was drawn like a moth to a flame!

Jacques, marquis de Saint Phalle, who died on 15 June aged ninety-two, belonged to a family that can trace its roots as far back as the sixth century. His ancestral home was the Burgundian Chateau de Mountgoublin. During the war he managed to escape from occupied France, coming to London, where he hoped to fly Spitfires with the RAF.

Instead he eventually found serving with the Normandie-Neman squadron of the Free French Air Force, which was sent, on the suggestion of Charles de Gaulle, to the Eastern Front in 1943 to aid the Soviet forces. The unit had the name Neman appended to its title by Stalin himself after the part it played the Battle of the Neman River in 1944.

Although Saint Phalle himself only ever had one confirmed kill in a hundred missions, shooting down a Focke-Wulf 190, the squadron destroyed 273 enemy aircraft in all between March 1943 and May 1945, flying Russian Yakovlev ‘Yak’ fighters, as effective in the east as the Spitfire was in the west. Such was the prowess of the unit, emphasised in Soviet propaganda, that Field Marshal William Keitel ordered the immediate execution of any captured French pilots.

Saint Phalle, clearly a remarkable man, had begun his pilot training before the war, obtaining his licence in the summer of 1939. Even so when he came to London he had not enough flying hours to qualify as a skilled pilot. He simply overcame this obstacle by lying to Jean Tulasne, the commander of the Normandie squadron. For his part in the war in the east he was awarded the Order of the Red Banner, the Medal for the Victory over Germany and the Order of the Patriotic War.

I have no idea what his politics were; so while I’m tempted to call him the ‘Red Marquis’ this may be a disservice to his memory. Instead, by one of the little ironies that history rather favours, a French aristocrat found himself fighting for the "workers' state". I wonder what Robespierre and Marat would have made of that!

The magic of the craft has opened for me a world in which I shall confront, within two hours, the black dragons and the crowned crests of a coma of blue lightning, and when night has fallen I, delivered, shall read my course in the stars.