The Tale of Peter Slime 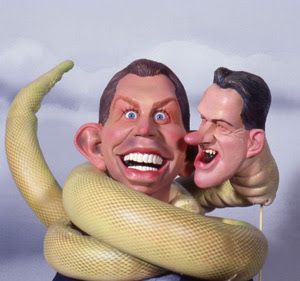 I’m sure you must have gone to movies after watching seductive trailers – I know I have – only to discover that everything worth seeing was packed into those few brief minutes, the rest being pure tedium!

This came to mind on reading The Third Man: Life at the Heart of New Labour, Peter Mandeson’s recently published ‘memoir’, extracts from which are presently appearing in The Times. I can only assume that they have chosen the ‘best bits’ which is rather alarming because the ‘best bits’ are really quite pedestrian, written in a dull, clichéd style! I suppose I should be grateful that it saves me the trouble of buying a tome that weighs in at over five hundred pages.

So, here we are – what? –some eight weeks from the general election and Mandelson, the former Business Secretary and all round fixer (oh, how I miss writing about him), has published a book. Even with his superhuman powers this exercise clearly had to be in preparation for some time, this exercise in self-justification and back-stabbing. I’m really not sure if political memoirs these days will be of much use to future historians, psychologists, perhaps, but not historians. It’s really a race to see who gets the boot in first, and Mandelson has made sure that it’s him.

The dear Lord tells us of the treachery in the last days of the New Labour Reich, an amusing confirmation of all those YouTube videos with Gordon Brown as Hitler. He also tells us that victory was impossible under Brown; that when Harriet Harman proposed an election campaign around the three Fs – future, family and fairness – he together with Alistair Darling and Douglas Alexander suggested their own version – Futile, Finished and Fucked.

Interesting, don’t you agree? I seem to remember that it was Mandelson who effectively rescued Der Fuhrer in the wake of the James Purnell resignation fiasco and in the wake of Geoff Hoon and Patricia Hewitt’s ‘January Plot’, presumably while this book was still being shaped. He was also responsible for Labour’s subsequent electoral campaign, the “I agree with Nick” campaign, possibly the most cack-handed in the party’s history. I wonder if there is some deeper message here about Labour politics and the role Mandelson played in the final days. After all, this is a government that might have been saved if Brown was ejected in sufficient time. But he was not, thanks to the dear Lord, making history as well as writing history.

There were lots of potential assassins, lots of people who wanted to follow in the steps of Cassius and Brutus, people like David Miliband and Jack Straw, who in the end had not the courage to make the unkindest cut of all. When I think of these people, this shabby and treacherous Labour shower, I’m minded of the comment once made about German generals and their failure to stand up to Hitler: that their heads were too close to their arses because they had absolutely no backbone.

As for the book, the Mandelson masterpiece, I’m minded of the words of Major Calloway to Holly Martin in the movie The Third Man –“That sounds like a cheap novelette.” Yes, in a way it does. Still, when I see him from now on the Harry Lime theme will go through my head. It certainly shall.