Father of the Age 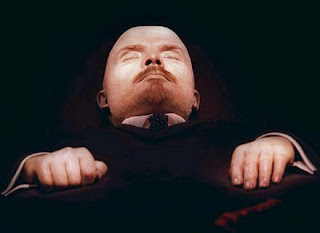 Late this afternoon I finished reading Molotov’s Magic Lantern, Rachael Plonsky's idiosyncratic and brilliant journey through modern Russian history, taking as her point of departure the books she found in the Moscow apartment of Stalin’s former foreign minister and co-executioner. I intend to write a review over he next few days but I'm adding this, I'm adding what you are about to read, in a kind of intellectual ferment. It's an impression on the same basis as the painting style. Forgive me if it seems a little incoherent. Quite simply, it's raw thought.

Molotov, or Vyacheslav Skryabin, his real name, was a product of an age. Europe has been divided by historians into distinct phases or ages - the Renaissance, the Enlightenment, the Age of Reason, all quite arbitrary when one thinks about it. For me the last century up to the fall of the Soviet Union is best defined as the Age of Ideology, the age when human destiny was guided by one malevolent idea or another.

Yes, malevolent. How does one understand a man like Adolf Hitler? How does one understand a school drop-out, a man who disgraced and betrayed his family, who sank into the most abject sections of Viennese society? But for the First World War this man would have died in complete obscurity in some common lodging house in Vienna or Munich. But his pathology was Germany's pathology. The war, which really did pull out the roots of European civilization, gave him his opportunity; ideology gave him his opportunity.

But that was not enough, Germany’s defeat and sense of grievance was not enough; there had to be something more; there had to be a Moses, one who brought the commandments of the Age of Ideology down from Mount Sinai. The Moses was Vladimir Ilyich Ulyanov, Russian, Kalmyk and Jewish, Lenin, to use his alias, in my estimation the most vile, most malevolent human being who ever lived, and, oddly enough, the apotheosis of mediocrity.

I saw him when I was in Moscow - if it is him and not a wax replica. Inwardly I could feel nothing but contempt. Every evil that you have ever conceived, every evil of the Age of Ideology is his. Hitler is nothing; Hitler was merely an epiphenomena. He, along with Stalin, Trotsky, Mussolini, Mao, Pol Pot and the rest of the monsters are simply inconceivable without Lenin. Some of his children may be bastards but they are still his children.

The remarkable thing is that he was crushingly dull, not at all charismatic. His writing is second-rate, hysterically polemical and almost always off target. His oratory, from what I can gather, was even worse. If he is evil his evil is even more banal than that of that stupid apparatchik Adolf Eichmann. I can't understand, I don't understand, why history threw up this bourgeois mediocrity other than as some massive joke.

I remember reading the comment of a Russian after he'd seen him in Red Square for the first time, after it was safe to express an honest opinion. His hope was that Ulyanov would remain like this forever, not buried with his mother as he had wished, that he should remain as an exhibit for the idle and the curious to gawp at as if visiting an exhibition of stuffed animals prepared by a taxidermist. He should remain like this for the sacred soil of Russia would simply refuse to hold him. Amen
Posted by Anastasia F-B at 17:12