The Song of Cassandra 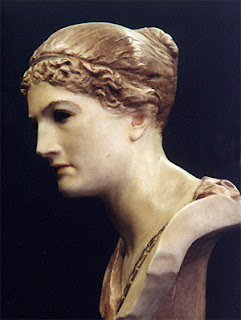 Channel Four, one of the terrestrial television companies in Britain, broadcast a brief series of historical documentaries last week under the title Bloody Foreigners, detailing the involvement of outsiders in certain key events in our history.

The last of the series focused on the Emperor Septimus Severus’ futile attempt to subdue the tribes north of Hadrian’s Wall in the early third century AD. This was the last try by the Romans to conquer the whole island of Britain, a task which had frustrated emperors and generals all the way back to Agricola in the first century.

The narrative was generally good- though some of the dramatic recreations verged on the naff- completely spoiled by an ending that managed to get the facts of the subsequent fate of the Severan dynasty wildly wrong! Honestly, why don’t these TV companies get some decent advice? :-)

Sorry, that’s a wholly unnecessary diversion, just a small irritation that manages to get the hornets of my intellect buzzing like mad. The essential point the programme made was sound: that the Romans came mob-handed into a complex tribal society, hoping for a pitch-battle, hoping to for a single knock out blow against the ‘barbarians’ which would bring their ‘kingdom’ into final tutelage.

The whole thing was a disaster in men, money and materials. There was no pitch battle. Instead the tribes nibbled away at the Roman army in a series of guerrilla attacks that wore it down. There was no head of a ‘king’ to claim because the political structure of the Caledonian tribes allowed for as many ‘kings’ as there were communities. Severus retreated having achieved nothing, covering his failure in an issue of coins proclaiming a famous victory, the kind of misleading propaganda that Romans went in for.

The point is the Romans were victims of their own preconceptions about ‘barbarians.’ They came, they saw but they did not conquer, they could not conquer. They simply made matters worse, creating ever more enemies with every step. Severus’ army, forty-thousand strong, might as well have been chasing the wind.

Here is another thing that irritates me, the stupid incomprehension of politicians, their inability to read the runes of history. Yes, history does have a message if only one has the intelligence and the patience to take heed. As Septimus Severus marched into Scotland so did George Bush and Tony Blair march into Afghanistan two thousand years later. They found a bad situation and they made it worse. I could tell you exactly what the outcome is going to be, could tell you right now, but you probably already know.

It’s happened time and time again, this blindness in the face of history, this tendency to base strategy on the worst, most stupid preconceptions. And it’s not as if the two Bs had to look all the way back to the Romans in Britain; they had a more immediate example at hand, the example of British involvement in Afghanistan in the nineteenth century.

I would like to be there, in the corridors of power, saying stop! wait! look! think! every time some foreign adventure is being considered, every time a new campaign is being planned. But I know, like all historians, all those who understand the past and the lessons it brings to the present, my fate would be that of Cassandra.
Posted by Anastasia F-B at 10:53