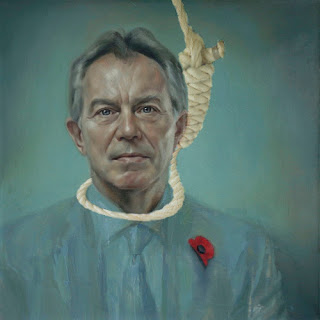 In 1942 in the city of Riom in France the leaders of the pre-war Popular Front government, including Leon Blum, the former premier, were put on trial by the Vichy authorities. The aim was to prove that they had been responsible for France’s lack of preparedness that led to the debacle of 1940. It was a public relations disaster with the defendants easily rebutting the charges, earning the sympathy of the neutral press in the process.

At my own peril I would like to hold a British version of the Riom trial, though much more carefully focused, with much more plausible charges: I would like to arraign Tony Blair, Gordon Brown and the other members of the New Labour Popular Front. With what; what was their crime? I would really have to think about that. Perhaps they could be charged with fiscal irresponsibility; perhaps criminal mismanagement of public funds; perhaps warmongering or perhaps incompetence in high office. Let me just simplify matters – I personally would have them indicted on a charge of high treason.

You think I’m going too far, do you, that such a serious charge could not be levelled against members of the British government? All I will say here is that between 1997 and 2010 this country was changed out of all recognition, changed for the worse; that its interests were betrayed and its people deceived. There are now serious doubts if we can ever recover from the damage down in those years; or if we do, it may take decades.

The worst thing, perhaps, was the use of public money not in the interests of the nation as a whole but in a grand form of political gerrymandering. A national constituency of dependency was created, intended to entrench Labour in perpetuity. More and more money was spent on doles and welfare, on the creation of a sub-culture of bread and circuses or, better said, pizzas and telly. And while a British underclass was encouraged not to work the gap in the employment market was filled by immigration, mass immigration, deliberately intended, by the admission of former ministers, to alter the demographic character of this country.

There is Europe, of course, the surrender of more and more sovereignty to a foreign power, an alien power, one hostile to all of our historical and cultural traditions. That particular charge would weigh most heavy, as an act far more knavish than that of any other government in British history. I imagine if Blair and Brown had been directing affairs in the days of the first Elizabeth, rather than William Cecil and Francis Walsingham, the Spanish Armada would have been welcomed as European ‘partners.’

So the list goes on: misuse of public funds, the encouragement of irresponsible levels of mass immigration and the surrender of forms of sovereignty that the nation had jealously guarded for centuries. And then there are the foreign adventures, the wars and rumours of wars.

As I have said before, I believe the Second Gulf War to be one of the greatest strategic and political errors in this country’s history, far worse than the Suez fiasco. But set that to one side. The only way to fight a war, if wars have to be fought at all, is to win. And the only way to win is to ensure that the military have the tools sufficient for the task. But they did not. They were starved of resources in Iraq just as they were starved of resources in Afghanistan. In Iraq the army was so under-strength that latterly it could only maintain the pretence of control by entering into shameful bargains with the murderous Shiite militias. Our retreat from this country will count as among the most wretched in all of British military history.

Yes, for these reasons and more I would put the whole shabby Popular Front on trail. I would conduct the prosecution in person. Safely in my hands there would be no repetition of Riom, believe me, there would not. :-)
Posted by Anastasia F-B at 16:00