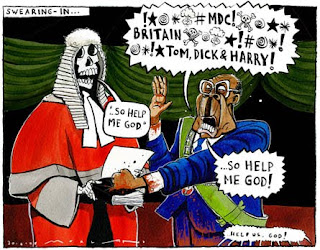 People familiar with Chaucer’s Canterbury Tales may recall some of the oaths favoured in the Middle Ages, usually based on some aspect of the divine anatomy – “God’s teeth”, “God’s bones”, that sort of thing. It rather makes today’s’ favoured forms of swearing repetitive and rather bloodless in comparison!

In the July issue of the BBC History Magazine John Spurr looks at profanities from the fifteenth to the eighteenth century, showing what they reveal about society at the time (“Damn your blood”- Swearing in Early Modern English). I noted with interest that anti-swearing statutes passed in the time of James I and George III made a distinction between swearing and cursing. So when one King John of Colne Engaine in Essex swore by “God’s blood” that he would be avenged on the local church wardens and “bade a pox on them” he was guilty of both swearing a profane oath and of cursing!

The profane oath was really a reflection, a negative reflection, of that most solemn legal oath ‘so help me God.’ In the late seventeenth century John Bunyan, author of The Pilgrim’s Progress, was complaining of vain swearers, who “tell their jesting tales, and lies, and then swear by God that they are true.” In the previous century a Protestant pastor reported the situation in verse, showing that not much had changed since the days of Chaucer;

Some swear by God’s nails, his heart and his body
And some swear by his flesh, his blood, and his foot
And some by his guts, his life, and heart root,
Some other would seem all swearing to refrain
And invent idle oaths, such as is in their idle brain:
By cock and by pie, and by the goose wing
By the cross of the mouse foot and by Saint Chicken
And some swear by the Devil in their blindness.

It’s the sheer variety that amuses me, not just those mentioned by the pastor but oaths by idols, by the mass, by our Lady, saints, birds, beasts, real or not! Moralists were shocked but for some there was a clear logic in their hostility to profanity, as eighteenth century authorities made clear;

For from a custom of swearing men easily slide into perjury, and how can it be consistent with reason that a man who hourly invokes God by rash and vain swearing should boggle at a false oath, whenever his lust, his covetousness, his revenge and his ambition prompt him to it?

The battle between the ‘cavalier’ swearers and the ‘roundhead’ righteous would seem to me to be indicative, at a low level, of a growing fracture within the general community from late Tudor times onwards; between those who held to profane tradition and those who wanted a moral revolution. The Godly, as Spurr writes, became intolerant of any form of swearing outside of the law courts and some of the more extreme sects, including the Baptists and the Quakers, refused even to swear in that setting.

And heaven help any public figure who broke the moral code. In 1654 the MP Henry Glapthorne let rip, swearing by "God's wounds, by Good's blood, by Jesus Christ, by the eternal God, God confound me body and soul, God damn me, the Devil fetch me, God refuse me." The Devil did not fetch him and God did not refuse him - his constituents did: they successfully petitioned for his removal from Parliament as a "common curser and a swearer" who was not "fit to be a law-maker and a parliament man for them."

It's a mark of how much things have changed since those days that oaths by God or Christ are now considered to be fairly mild. The racial and sexual terms that are now considered offensive - I admit with ever decreasing effectiveness - would not have bothered the people of Tudor, Stuart and Georgian England. In other words they would not give a fuck about fuck. :-)
Posted by Anastasia F-B at 15:41