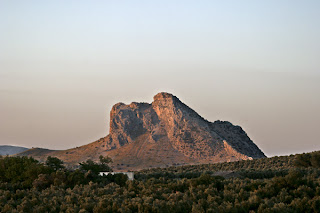 You’ve decided to fly south; you’ve decided to go and see Andalucía in the sun. Your flight arrives at Malaga, the town where both Picasso and Antonia Banderas were born. From there you drive west on the road to Gibraltar. And what do you see? Why, mile after mile of costal development, apartment blocks without interruption, developments completed and developments abandoned for lack of cash. Welcome to the Costa del Sol, possibly the least romantic place on the face of the earth.

Some parts admittedly are worse than others. Torremolinos is not my idea of hell; Torremolinos is hell. But one thing is sure – Laurie Lee would never recognise the coast he once walked along on his distant Spanish adventure; it’s gone. Still, do not despair. The damage is bad but it’s fairly superficial. Turn inland and one can indeed find something of the old Andalucía, of the ancient kingdom of Al-Andalus, from the Alhambra in Granada to the Mezquita of Cordoba.

But it’s another place I want to write about, a place that I assume most people stuck on the coast will ever have heard of. It’s Antequera, the city of the mountains that lies to north of Granada. From the Alcazba, the Moorish castle at the highest point of the town, I looked out La Pena de los Enamorados – Lover’s Rock – a great sphinx-like face if viewed from a side angle, an Indian lying on his back. It gets its name from a romantic, Romeo-and-Juliet-style legend going back to the days when Andalucía was still under the control of the Moors

The story is that a Christian from Antequera fell in love with a Muslim girl from nearby Archidona. Leaving together, they were pursued by Moorish soldiers. To evade them the lovers took refuge on the limestone crag, standing almost nine hundred meters above sea level. Rather than surrender they leapt from there to their deaths. The story was later adapted by the poet Robert Southey in Lalia and Manuel. True or not I really don’t care; the story appeals to my romantic sensibilities. I looked on that great face with a sense of loss, a sense of old, unhappy, far-off things, and lovers long ago.

Or is it some more humble lay,
Familiar matter of to-day?
Some natural sorrow, loss, or pain,
That has been, and may be again? 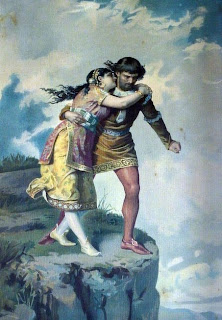